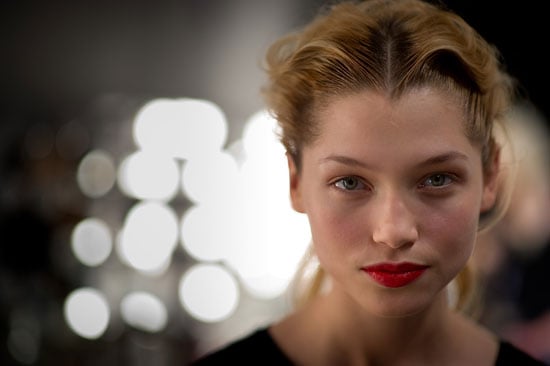 Red seemed to be the colour on everybody's lips today at London Fashion Week. We spotted it at Amanda Wakeley, BodyAmr and Emilio de la Morena. The look was far cooler at Mary Katrantzou where models' mouths were painted with a light grey, which made it look as though they'd been out in the snow for too long. Speaking of colour, it was all about the lips with eyes are Fashion East and Ashish being colour blocked. Hair-wise, one of the Fashion East looks was all about the voluminous frizz, while models were given a slick cow slick at Emilio de la Morena. And polka dots came out to play once again at Meadham Kirchhoff. What do you think of day five? Got a favourite look?