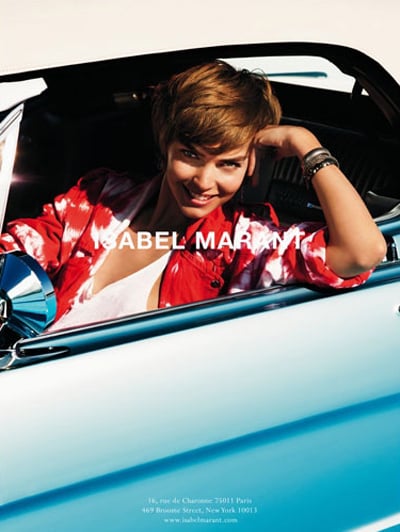 Let's face it, model Arizona Muse can pretty much pull off any hairstyle she tries — sleek 'n' straight, retro curls, a ballerina bun, you name it, including the pageboy 'do she revealed in November last year. Ms. Muse has just debuted her shorter locks styled in a 1950s-esque thick, choppy pixie cut for Isabel Marant's Spring 2012 campaign — think a modernised take on Audrey Hepburn's Roman Holiday cut. Lensed by Inez & Vinoodh, Arizona is captured in a vintage car sporting her trademark radiant, flawless skin and glowing pearly whites. What do you think of Arizona's new 'do? Love it? Would you attempt this style for a fresh Spring look?

Models
This Is How It's Done: Ashley Graham Breast Pumps Backstage Before First Postbirth Runway Show
by Victoria Messina 5 days ago

Wedding
Très Chic! Natalia Vodianova Is the Picture of Elegance in This Flowy Collared Wedding Dress
by Chanel Vargas 6 days ago

Models
Halima Aden on Diversity in the Modelling Industry: "This Isn't a Trend . . . These Women Are Here to Stay"
by Sarah Wasilak 3 days ago

Celebrity Style
My Heart! Gigi Hadid Looks So Cute Showing Off Her Baby Bump in a Crop Top and Bucket Hat
by Nikita Charuza 1 week ago

Celebrity Style
Gigi Hadid Brings a Whole New Meaning to Mom Jeans, and Calvin Klein Would Be Proud
by Sarah Wasilak 4 weeks ago