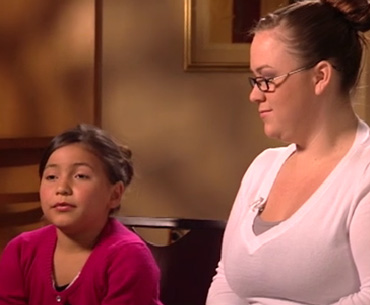 For the past few weeks, the Internet has been abuzz with stories of the so-called Botox mum — Kerry Campbell, the San Francisco mother who claims to be injecting her 8-year-old daughter, Britney Campbell, with Botox. We first heard of the Campbells in March, and while some of the details have remained a little sketchy since then, ABC News is reporting that Britney has been taken away from her mum. The San Francisco Chronicle discovered that Kerry might not even be who she says she is. Here's a timeline of events that'll bring you up to speed in this truly bizarre story.

March 23 British tabloid The Sun reports that Kerry, a supposed licensed esthetician who is allegedly from the UK, had been injecting her daughter with Botox and giving her "virgin" waxes in preparation for kiddie beauty pageants. We smelled a hoax, as a search for a Kerry Campbell living and working in the San Francisco area yielded no results.

Keep reading . . .May 6 An eerily similar story pops up in The Sun a few weeks later. But this time, the British mom is named Sharon Evans, is currently living in San Diego, and is not just injecting her 7-year-old daughter, Bree, with Botox, but giving her eyebrow tattoos, as well. This leads Jezebel to note the number of odd similarities between the stories.

May 12 The Campbell story picks up momentum, as ABC's Good Morning America talks to the mother and daughter duo of Kerry and Britney (who strangely, at this point, wouldn't give out their last name). "We were getting into the pageants," Kerry told the news outlet. "I knew she was complaining about her face, having wrinkles, and things like that. When I brought it up to Britney she was all for it." It's also interesting to note that the allegedly British Kerry does not appear to have an accent.

May 12-13 Later that day and into the next day, outrage sparks regarding the potential emotional and psychological ramifications of childhood Botox, prompting Kerry to be investigated by the San Francisco Human Services Agency.

May 16 ABC News reports that Kerry had lost custody of her daughter over the weekend, although some sleuthing by the San Francisco Chronicle reveals the mother's name isn't Kerry Campbell in the first place, and the woman doesn't even reside in San Francisco. Trent Rhorer of San Francisco Human Services told the paper that the agency has "completed our investigation, and we are no longer involved in the case." He declined to offer further information, noting juvenile confidentiality laws.

Obviously there's more to be told with this story, particularly when the majority of it just doesn't seem to add up. How much do you think this story is a hoax and how much bears any resemblance to the truth?

black lives matter
Only 1 Officer Is Charged in Breonna Taylor’s Case, but It’s Not For Her Murder
by Perri Konecky 4 days ago