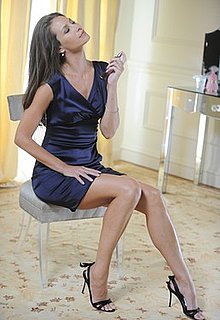 Christy Turlington has said she doesn't wear high heels very often, but she apparently appreciates them enough to be the face of an Avon perfume inspired by sky-high shoes. The new fragrance, called Slip Into . . . , is an oriental floral with notes of blackberry, freesia, violet, rosewood, orchid, Cashmeran, orris and amber that's due out next year.

It sounds very flowery and a little sweet, and Christy says that she wears the fragrance "if I want to elevate my spirit or if I'm going out. And if I'm putting on a pair of heels, I am definitely putting on fragrance." Would you be interested in spritzing Slip Into . . . on with your favourite pair of heels or are you D to the Done with all these shoe-inspired scents?

Psst. What do you think of the ad image that's been released? I don't think it looks anything like Christy!

Skin Care
Chika on How PCOS Affected Her Skin and Confidence: "It's Something I Do My Best to Manage"
by Chanel Vargas 5 days ago

Celebrity Beauty
Does Zac Efron Have Any Tattoos? The Answer Is Surprisingly Complicated
by Jessica Harrington 6 days ago