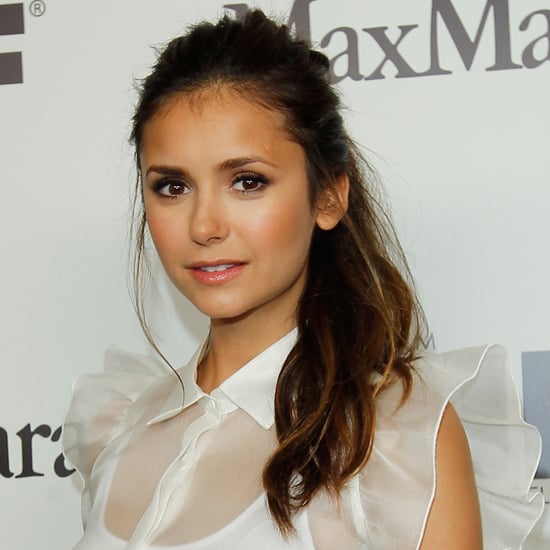 On Monday night, Nina Dobrev attended a Max Mara cocktail party sporting a loose ponytail. Hairstylist Alex Polillo chose the subtle style to really allow her ensemble to have the spotlight. "Hair up was appropriate with the neckline, but an up 'do seemed too stiff," Polillo said. "So a ponytail fit right in place — young and fun while still being able to show off the top." Polillo began by prepping hair with Bumble & Bumble Surf Spray ($44). The salt in the formula helps create volume and gave Nina's hair a windblown appearance. Then, her hair was blown dry and curled with a medium-barrel iron. Polillo arranged her hair in a loose medium-height ponytail and used bobby pins instead of a hair tie to hold it in place. In order to create a carefree air, Polillo pulled out pieces to frame Nina's face. Finally, the entire style was spritzed with L'Oréal Elnett hair spray ($9.95) for an all-night hold. The best part? This style is simple enough to recreate for a cocktail party of your very own.

Skin Care
Alicia Keys Is Gradually Unveiling Her Beauty Brand, Including Its Fitting Name: Soulcare
by Kelsey Garcia 18 hours ago

Hair
Why Am I Scared to Wear a Protective Style Around Black Men I'm Interested In?
by Natasha Marsh 2 days ago
Latest Beauty
×