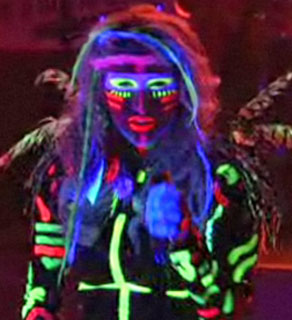 If you saw Ke$ha's performance of "Your Love Is my Drug" on Saturday Night Live over the weekend, you know what I'm talking about. Glow-in-the-dark makeup has been showing up all over: the Black Eyed Peas wear it in their "I Gotta Feeling" video, Sia has been known to use it in performances and a new DKNY 20th anniversary video features a model dancing around in it.

Black light was HUGE back in the '80s, and in fashion, everything old eventually becomes new again. While I'd definitely wear Ke$ha's red lipstick — it's cool and still pretty wearable — the eyeshadow and black scare me. What about you, is this a trend you'll be trying or do you think it should stay back in 1984 with frizzy perms?

Makeup
This TikTok User's 12 Days of Christmas Makeup Challenge Is So Inventive, We Can't Look Away
by Jessica Harrington 17/12/20
Latest Beauty
×