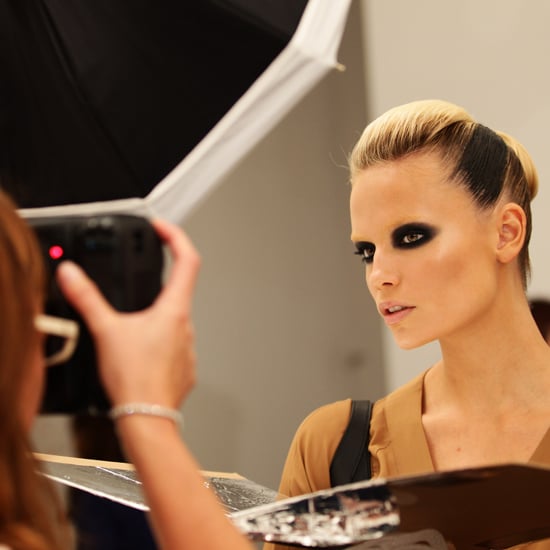 Most of us have our pictures taken pretty often. And while most people have a "good side" or a smile they tend to fall back on, it's far less common to see someone who has a makeup and hair philosophy for photos. You don't have to rush off to the bathroom to make yourself over every time someone whips out a camera, but there are a few things you'll want to steer clear of if you know you're going to be within a lens' scope. See our quick rundown on what not to do.

Ever seen a picture of yourself where your face looked oddly white or had pale patches? That's probably thanks to titanium dioxide. This common foundation and concealer ingredient is a great natural sunscreen, but its reflective properties interfere with camera flash, making your face look "ghosted." So unless you're going flash-free, make sure the product you're wearing isn't chock full of the stuff.

Yes, the beehive is back, but when it comes to photos (especially group pictures) big hair is a mistake for lots of reasons. If you're part of a large group, it's going to be hard to place you anywhere without obscuring someone else's face. And even if you're by yourself, huge hair makes it difficult for a photographer to get everything in, so you'll end up with odd angles and maybe an unflattering photo crop.

On a normal day sheer, soft blush and lip colour might be more than sufficient, but when you're going to be in photos, it's best to go for a full face. Photos tend to flatten and blanch out features, so having a little extra colour is a smart way to ensure that you come out looking like yourself.

Hair
How to Ease Irritation From Synthetic Hair, From Your Scalp to Your Skin
by Natasha Marsh 15 hours ago

Hair
I Tried Schwarzkopf's First Dye For Textured Hair, and the Results Were Surprising
by Tracy Achonwa 15 hours ago