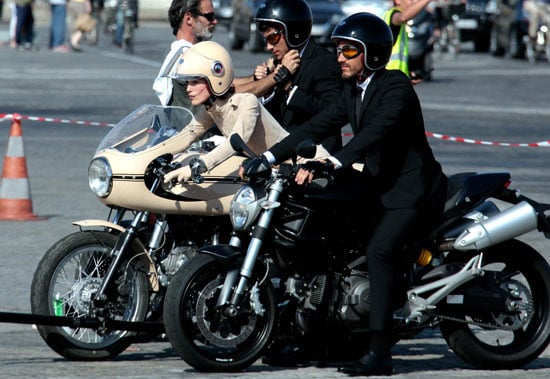 Some thought that Keira Knightley's bowler-hat-as-top and braces-as-bra Chanel Mademoiselle ads were a little racy, so I wonder what they're going to think now that an actual motorbike is involved . . . Spotted in the Place de la Concorde in Paris on Sunday, the British actress was filming the sequel to the Coco Mademoiselle ad that she originally shot back in 2007. The sequel sees her teaming up again with director Joe Wright, who not only shot Keira in the first Coco Mademoiselle ad, but also in Pride & Prejudice and Atonement. Chanel has been tight-lipped about any details, revealing only this sentence: "Boldness and freedom in the city of light . . ." What do you think so far? LOVE?

All images courtesy of Chanel