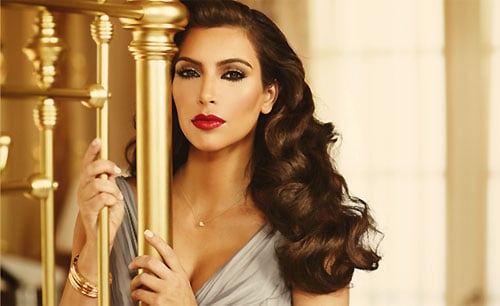 Kim Kardashian has made no secret of her love for Elizabeth Taylor, whom she considered to be the "epitome of old school Hollywood glamour." For the second time in recent months, the Keeping With The Kardashian star has channelled the late actress, taking to Twitter to show off an image from her ad campaign for her soon-to-be-launched fragrance True Reflection. In the image, Kim is sporting long, retro-inspired curls paired with a flawless creamy complexion and a standout red lipstick, along with the caption "another pic from my new True Reflection fragrance ad campaign...ultra glam! LOVE red lips! #ChannelingElizabethTaylor." What do you think of Kim's latest ad campaign? Do you love it? Or do you think it's a too similar to her vintage-inspired beauty look from her last campaign?

Celebrity Beauty
The Beauty Looks at the Emmy Awards Were So Good, We Almost Forgot It Was All Virtual
by Jessica Harrington 21 hours ago

Celebrity Beauty
Taylor Swift Did Her Own Hair and Makeup For the ACM Awards, and She's Basically a Pro
by Jessica Harrington 5 days ago

Celebrity Beauty
Kylie Jenner Did a 'What’s in My (Birkin) Bag' Video and Well, it’s All Kylie Skin
by Bree-Grant 5 days ago