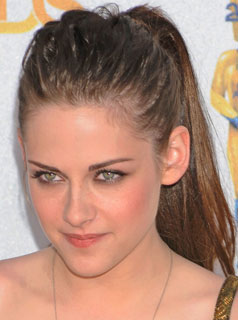 Last week, we noticed that Kristen Stewart was sporting extensions and after seeing her hair at the MTV Movie Awards, we almost forgot that her length isn't her own, it looks so natural, unlike a certain Miss Miley. Fekkai stylist Adir Abergel used extensions to create Kristen's high, textured ponytail for the event. Instead of a traditional clip-in, Kristen is wearing track extensions — just a simple length of hair.

Abergel wrapped the track around her own natural ponytail so that her shorter strands weren't visible, then pinned the track to the base of her ponytail. He covered the track completely by wrapping a piece of Kristen's hair from underneath around the track and then pinning it. To keep it all in place, he added Frédéric Fekkai Coiff Fini Sheer Hold Hairspray ($46). So whether your hair is all yours, or you're using extensions like KStew, that's the secret to a perfect pony.