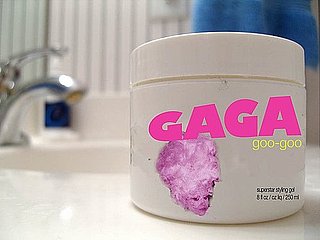 Eagle-eyed fans have been buzzing since a mysterious jar appeared in the singer's "Telephone" video and now Gaga has confirmed that the product placement is the real thing. "Touring and performing takes a lot out of me," Gaga said in a press conference. "But it takes even more out of my fake hair. I created Gaga Goo-Goo for real people who love to wear wigs as much as I do."

After undergoing more than a year of development, Gaga Goo-Goo is set to launch next month. But you won't be able to buy it at just any old store. In a feat of marketing synergy, Lady Gaga plans to team up with her "Telephone" duet partner for retail sales. "It just makes sense, since she's opening her own lifestyle boutique," Gaga explained. "Soon, you'll be able to purchase my wig gel at Bed, Bath & Beyoncé." For now, fans can preorder online.

What you do think? Worth checking out?