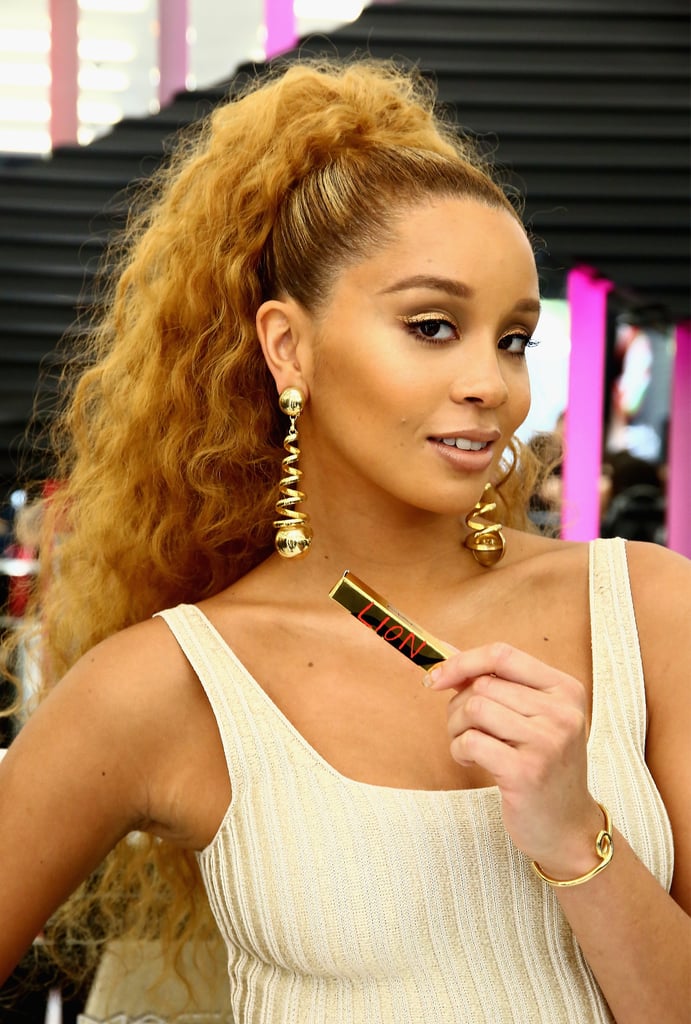 If you've yet to hear of the neo-soul music duo Lion Babe, it's time you got acquainted — because they're on the cusp of becoming a household name. Jillian Hervey is the pair's electrifying frontwoman, whose sound is like a deeper, smokier Corinne Bailey Rae. Hervey also is one of the stunning new faces of MAC Cosmetics' recent campaign Future Forward, for which she created a shade of Liquid Last Eyeliner that applies (and shimmers like) molten gold (out soon). When we sat down in MAC Cosmetics' Union Square store in New York City, she spilled on her beauty style, greatest influences, and more.

As it turns out, picking what product to design with MAC was an easy choice for Jillian. "My eyes are naturally almond-shaped and I do like to accentuate them," she explained. "And the gold . . . I love to play with metallics on stage." Another main component of her performance look is her incredible thick, long, wavy strands, which she whips around as she sings at festivals like Coachella.

However, while her hair is rumoured to be the catalyst behind the group's name, that's not quite true. Fans had been referring to her as a lion since she had decided to embrace her natural texture and had dyed it her signature honeyed-blonde hue for the first time. But from there, Hervey found a deeper inspiration. "It was more [about] the spirit of a lion," she said.

A curly lion mane like hers is even more susceptible to damage after colouring as textured hair is naturally more brittle, so she strategises to keep it healthy. She tries to space out her dye appointments as much as possible and relies on keratin treatments for strength. "I actually colour and then do keratin, because it'll really just seal everything," Hervey remarked.

Hair
Debby Ryan Is the Latest Celebrity to Get a Mullet Haircut, and Now I Want One, Too
by Jessica Harrington 3 days ago

Celebrity Beauty
Gigi Hadid Has 1 Tattoo, but Good Luck Trying to Spot It — It Might as Well Be Invisible
by Jessica Harrington 1 week ago
Latest Beauty
×