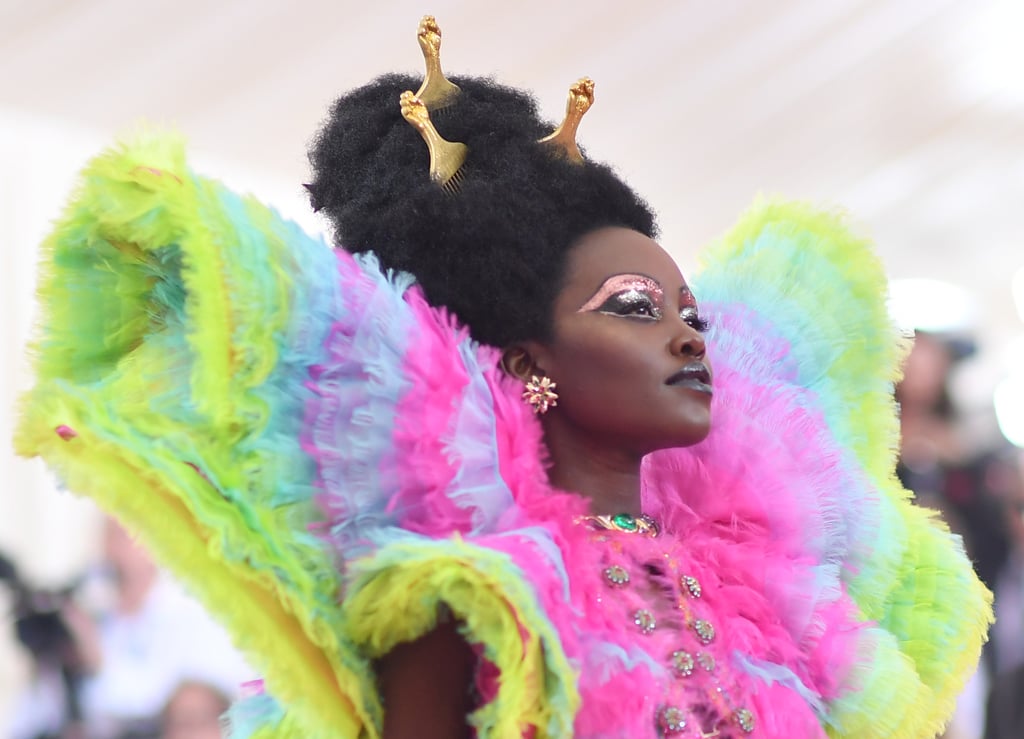 Lupita Nyong'o did not hold back on this year's Met Gala theme, and she looked completely stunning. Colour, glitter, drama — she brought it all. The actress wore a rainbow Versace gown and amplified the dress even more with her over-the-top hair and makeup. Celebrity makeup artist Nick Barose created her look and explained the drag inspiration behind it. "For the Met Gala Camp theme tonight, we drew inspiration from camp icon Divine from some of my favourite John Waters movies," he said in a press release. You might know Harris Glenn Milstead, aka Divine, from movies including Hairspray and Pink Flamingos.

"We played up the brows and eyes by super exaggerating it and making it look a lot larger and almost cartoonish. The key is to keep it graphic with strong black liner and long feathery lashes," Barose said. He used products from Lashify, including C Gossamer lashes in sizes 10, 12, and 14. For Nyong'o's makeup, Barose used a plethora of Lancome products, including Prep and Matte Primer, Teint Idole Ultra 24H Long-Wear Foundation, and L'Absolu Lacquer Gloss in the shade Not Afraid.

Celebrity hairstylist Vernon François styled Nyong'o's hair, which was accessorised with a crown of gold Afro picks that François and his team hand-painted for the event. He shared a behind-the-scenes look on Instagram and explained the meaning behind the tiny fists you'll spot on the combs. "The raised fist logo represent unity, solidarity. Also known as Black Power," he wrote. It's not until you see photos of Nyong'o from the back that you realise her hair is studded with stars, too.

It's all in the details. See photos of the Us star's stunning look ahead.

Makeup
4 Makeup Trends You'll Want to Try in 2021, From Coloured Lashes to White Eyeliner
by Danielle Jackson 16 hours ago