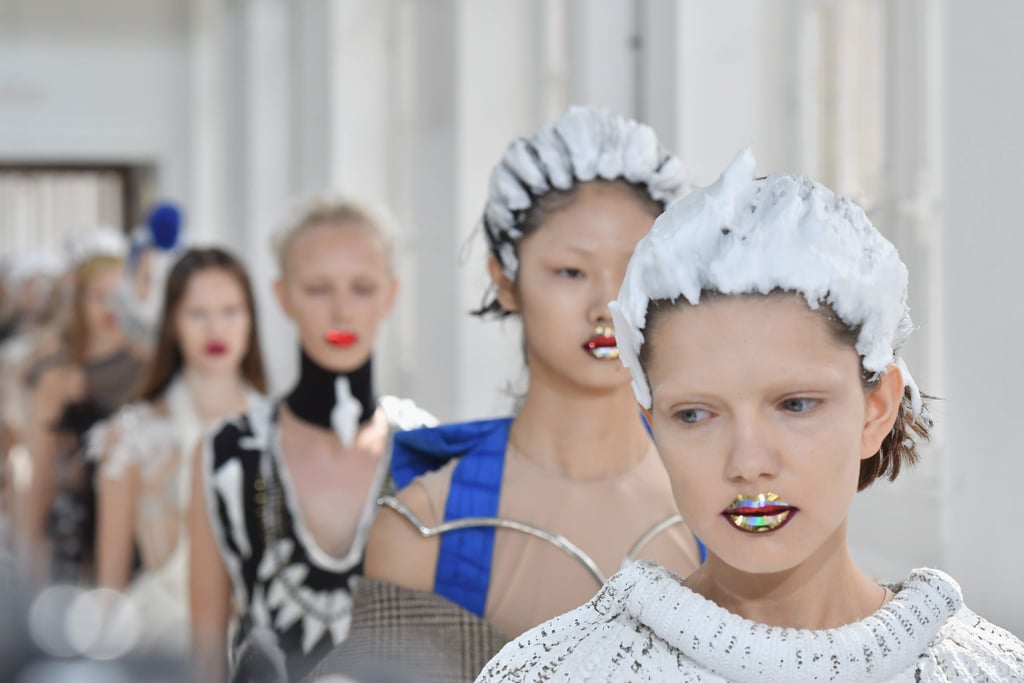 "Boring" is certainly not among the words you'd use to describe the hair and makeup at Maison Margiela's latest runway show. On July 5, the brand presented their avant-garde Fall 2017 collection at Couture Fashion Week in Paris with models sporting gilded hair, metallic lips, and a lot of shampoo.

Hairstylist Eugene Souleiman was behind the show's futuristic looks. The hairstyles really varied from extremely slicked and practically greasy-looking strands to hair so clean there was a mound of shampoo sitting atop it. Several models were given the former. For example, Bella Hadid's roots were heavily coated in gold glitter. Other models sported glittery blue roots in a shade reminiscent of Pat McGrath's UltraViolet Blue eye shadow.

It's therefore unsurprising that McGrath was responsible for Maison Margiela's inexplicably brilliant makeup. Classic red lips appeared more dramatic with the use of metallic foil, and bleached eyebrows added an additionally severe element. Meanwhile, the eye makeup was kept startlingly scarce with no discernible use of mascara, eyeliner, or eye shadow.

Though most of the makeup and hair looks would not translate seamlessly into everyday life, there's something about on-the-go shampoo hairstyle that we may re-create ourselves — albeit unintentionally. Look ahead to see Maison Margiela's over-the-top beauty.

Related:
These Are the Top 8 Beauty Trends You Need to Know For Fall 2017
Previous Next Start Slideshow
Join the conversation
HairMakeupBella HadidPat McGrathMaison MargielaBeauty TrendsCouture Fashion WeekFashion Week
More from POPSUGAR
From Our Partners
Related Posts