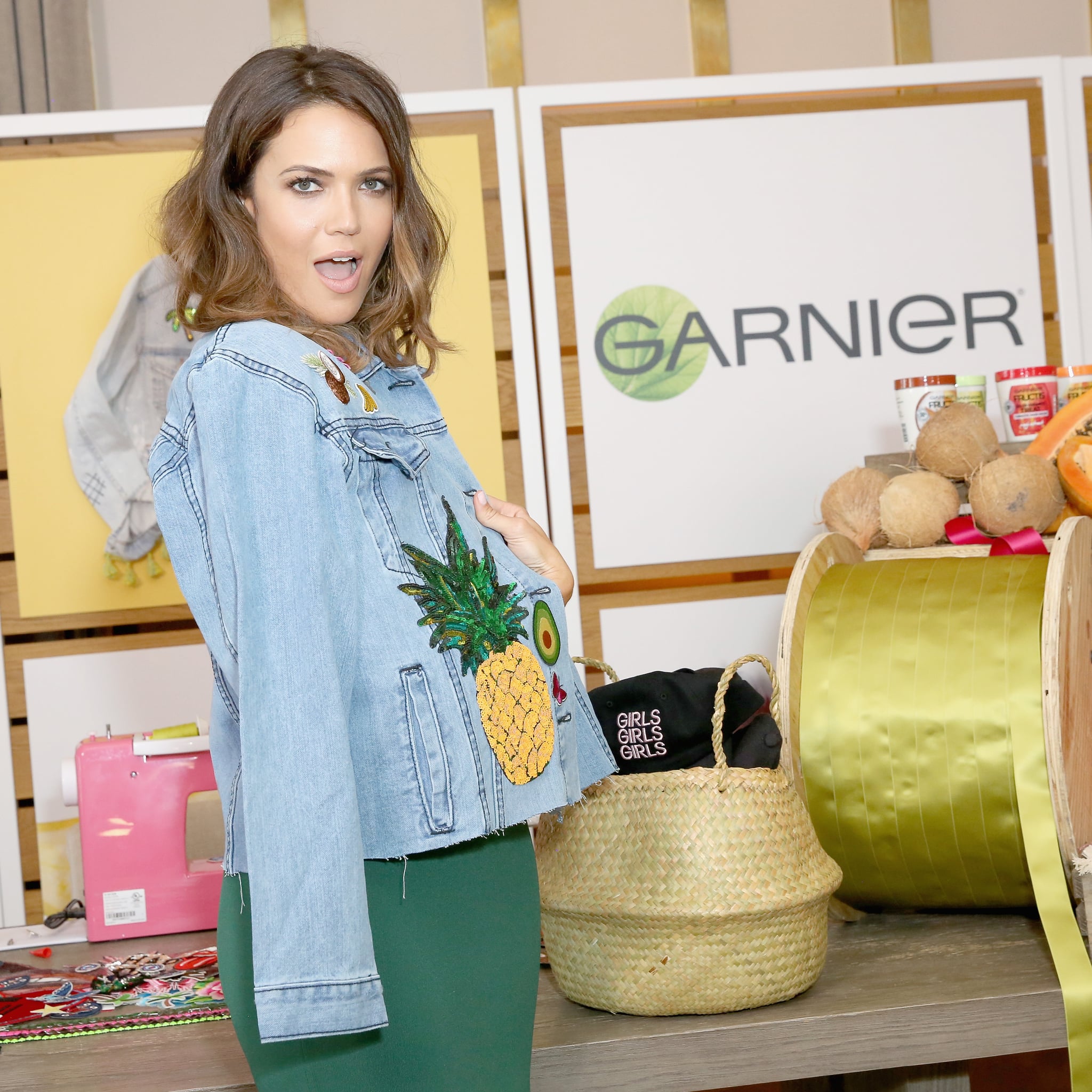 I don't think any of us expected "Candy" pop princess Mandy Moore to rip our hearts to shreds on a weekly basis, but given her expansive career, maybe we should have. She played a great villain in The Princess Diaries, she made us shed a few tears during A Walk to Remember, and she charmed us in Tangled. Hell, she's worked with Diane Keaton! She climbed Kilimanjaro this year! What I'm trying to say is the woman has range. She surprises and delights with every move.

Mandy is a Garnier brand ambassador, but it's not just about the hair products for her. I had a chance to sit down with her ahead of a girls' night in event, filled with denim jacket decorating, rolled ice cream, and lots of comfort food. But outside of the lighthearted games we played and discussions about This is Us, I learned Mandy is earnest about her concern for the world. She cares about our earth — exploring it and helping it thrive with sustainable products — and the people she encounters. As she commonly says via hashtag, she's a mam who gives a damn.

Keep reading to hear about our girls' night to remember.

PS: Indulge yourself!
MM: Yeah. You might as well enjoy it if you're going to indulge. I don't want to sit there and go like, "Oh, I shouldn't." It's like, "No, I want that." I'm going to savour the moment.

PS: What are your go-to night in movies or Netflix binge?
MM: I love 30 Rock for a TV show. I feel like I've seen every episode for 400 times and I could still watch it endlessly. And then any Nancy Meyers movie. I've seen The Holiday. I've seen Somethings Gotta Give numerous times. I mean, not numerous like 10 of times.

PS: So we're going to do some superlatives with the This Is Us cast. Who's most likely to bring the best snacks?
MM: Milo.

PS: Most likely to win every game?
MM: Sterling.

PS: That's a good one! Most likely to get into a deep conversation?
MM: Oh, probably Susan.

PS: Most likely to fall asleep first?
MM: Me (laughs).

PS: And most likely to whip out a face mask or a hair treatment?
MM: Probably me, but maybe Chrissy. I know Chrissy, the girls would be game for that.

PS: What's one thing that This Is Us has taught you about motherhood if anything?
MM: Oh, man. That you sort of figure it out as you go along. You're never going to have all of the answers, even as a grandmother. And it's sort of shown me that maybe I'm not as patient as I thought I would be. Hopefully, I will be when I enter into motherhood in real life. But, yeah, I've really noticed that you're never going to have all the answers and people sort of fly by the seat of their pants, and don't stress out, and don't give themselves grief, and just try to figure it out as they move forward.

PS: I know you probably hear this all the time, but my boyfriend and I watch This Is Us together.
MM: You do?

PS: And I sob every single episode.
MM: Thank you.

PS: You guys are doing an amazing job. And it's nice to have a show that I can connect with my boyfriend on. Every single week, we just love it.

MM: Thank you. We cry too. We're not immune and we know what's happening! And we're a part of it but we're still touched by it as well. It's hard not to be.

PS: Let's talk about your career, because you've covered a lot of ground. We have pop star, we have Disney princess, television royalty, movies . . .
MM: Royalty? Jeez!

PS: And you just climbed Kilimanjaro. Hello! That alone, even if you didn't do all of the rest of the stuff, that's amazing! I feel like you might be a goal-oriented person.
MM: I am!

PS: What would you say your goal is for the next year?
MM: My goal, I think, from a career perspective is maybe to make music to some degree. Figure that out.

PS: I was going to ask.
MM: I keep saying that, and I keep putting it off. But in the next calendar year, I really want to figure that out. I have more adventure stuff I want to do. I want to go to Machu Picchu. I want to go to Patagonia. I want to see the Great Pyramids. There's lots of places in the world that I feel like I haven't discovered. And really, checking off number one on my bucket list has empowered me in a sense, too. I'm like, "Oh. You just have to do it. You have to plan it. No one's going to do it for you. You just actively have to will it into existence."

PS: A lot of people don't actually achieve their number one on their bucket list. It's amazing that you have.
MM: Well, now I have to come up with a new number one. 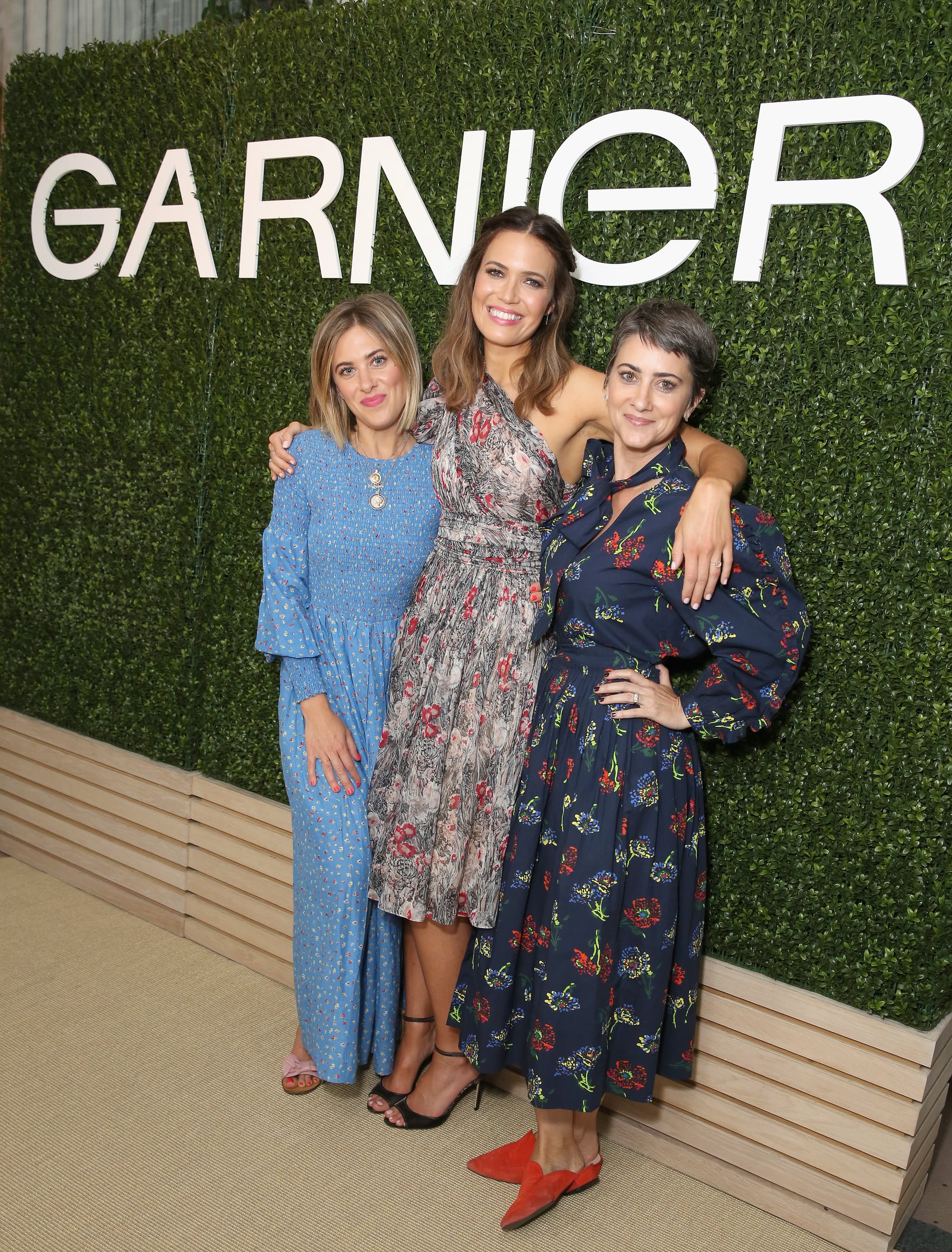 PS: You do! Speaking of music, is there anything that's inspiring you right now? Any music that you are listening to non-stop?
MM: My man (Dawes frontman Taylor Goldsmith) has a new record about to come out, the band does. I was in the studio for all of that. I was there as it was being written. The most inspiring thing is watching it unfold in front of you under the same roof!

PS: Let's talk about (hairstylist) Ashley Streicher, because you guys are — it's an understatement to say — pretty close.
MM: We're very close.

PS: What's the best piece of hair advice that she's ever given you?
MM: She has helped me embrace the undone texture that my hair naturally has, especially because I'm like, "I can't do my hair myself." I'm not really adept at it. And she's just shown me how to embrace my hair's natural texture and own it. And not stress out about having to do it, especially when I'm not working. I feel like I can't remember the last time I've blow-dried my own hair or used some sort of curling implement. I let it naturally dry and then I'll put some product in. But other than that, she's really shown me how to own what my hair wants to do on its own.

PS: That's awesome. Because it's kind of rare with a hair stylist. They always want to be doing different things.
MM: Well, I've tried, begrudgingly, for years to master her sort of cool-girl waves with a flat iron. I can't.

PS: Me either.
MM: I just need the bare minimum of what I can do to make it look acceptable to me today.

PS: You're a brand ambassador for Garnier. The new products that we're talking about tonight. What is your favourite and why do you love them?
MM: I am really proud to be a part of the Garnier family and to be an ambassador because this is a company that really has a cause that they stand behind. Their DNA is so deeply rooted in sustainability, which is something that really resonates with me. I love that they actively care about the ingredients and the formulas that they use in their products. I love that so much of them are naturally derived. They harness the bounty of nature and infuse it in their products. So it's like flowers and buds and seeds and fruits and all that kind of fun stuff. All of that just feels very in line with the way I kind of approach my life, and my lifestyle, and how I eat, and how I see the world.

PS: What would you say is the best piece of beauty advice you could give someone? It doesn't have to be specific like cosmetics or hair. It could be more on a bigger scale.
MM: God. It's so hard to distill it down to one thing. I guess just a sweeping generalization of less is more. Unless more is more for you. But for me, I've always sort of feel like downplaying it. Letting your natural beauty and confidence shine through is always going to work wonders. It never fails. You know what I mean? I feel like you don't have to cover up or overcompensate. Let it just be what it's going to be and it always works out better.

Skin Care
Miranda Kerr’s Hacks For Good, Glowing Skin, Including a Recipe for a Brightening Cocktail (& Yes, It's Alcoholic)
by Bree-Grant 3 days ago
Latest Beauty
×