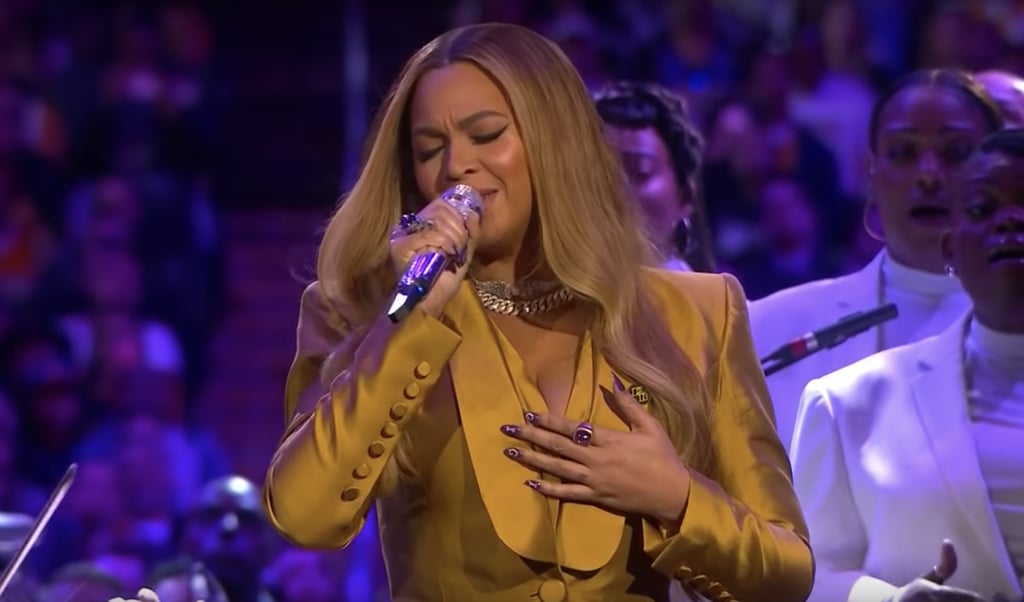 On Feb. 24, Kobe and Gianna "Gigi" Bryant were honoured in a public memorial service hosted by wife and mother Vanessa Bryant. Held at the Staples Centre in Downtown Los Angeles, the service was attended by dozens of celebrities like Jennifer Lopez, Alicia Keys, Stephen Curry, and Shaquille O'Neal and featured heartfelt speeches from close family friends like Michael Jordan and Jimmy Kimmel. Beyoncé was also in attendance, performing moving renditions of her songs "Halo" and "XO" and even honouring her late friend and his 13-year-old daughter with her fashion and beauty choices.

The singer wore a gold pantsuit and an amethyst ring that she complimented with a purple and gold manicure. Beyoncé's nails were painted purple and featured Kobe and Gianna's names printed on them in gold letters, but it's not clear who her manicurist was for the event. She, of course, wasn't the only person to honour the father and daughter with her look. J Lo attended the event with Alex Rodriguez and wore a beige manicure topped with gold glitter that she finished with the numbers "24" and "2" for Kobe and Gianna's jersey numbers.

Get a closer look at Beyoncé's nails ahead.