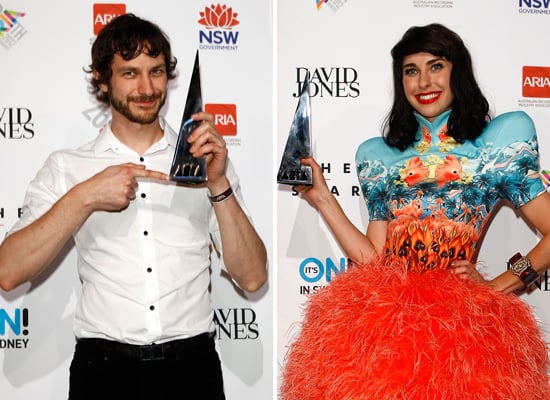 The ARIA Awards have wrapped for another year and plenty of Australia's brightest music stars were honoured in front of their peers at the Sydney Entertainment Centre. New Zealand-born Kimbra and her "Somebody That I Used to Know" partner Gotye (real name Wally De Backer) made history by being the first musicians to win best female artist and best male artist two years in a row. In fact it proved to be Gotye's night as he scooped up three awards, including album of the year. Six time-nominated Melbourne rapper 360 took home the award for breakthrough artist release, and Matt Corby's "Brother" won the public-voted song of the year. See the full list of winners after the break.

Award Season
Don't Miss Out! Here Are 50 of the Very Best Pictures From This Year's Emmys
by Haley Lyndes 5 days ago

Award Season
Kerry Washington, Tracee Ellis Ross, and More Are Donating Their Emmys Looks For a Good Cause
by Sarah Wasilak 6 days ago

Award Season
For the Love of Fuchsia — We're All About H.E.R.'s Custom Vera Wang Qipao Dress at the Emmys
by Chanel Vargas 6 days ago