It was a big day for The Help and an even bigger one for The Artist at the Critics' Choice Awards today. The Artist scored best picture and best director for Michel Hazanavicius, while Octavia Spencer and Viola Davis took home matching actress trophies for The Help (along with best acting ensemble). As for the men, George Clooney took home best leading actor for The Descendants, while Christopher Plummer was honoured as best supporting actor for Beginners. 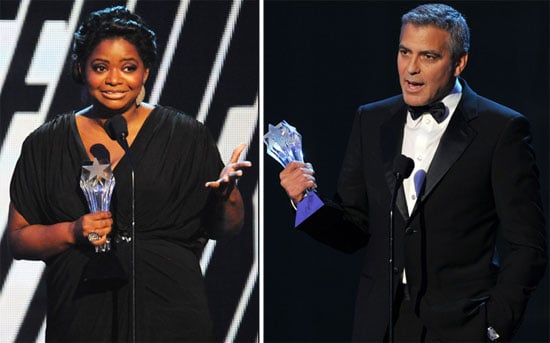 It's just the beginning of what's sure to be a very exciting awards season, which continues on Monday with the Golden Globes (fill out our printable ballot here to keep track of your predictions). Until then, check out the full list of Critics' Choice winners when you keep reading.

BEST CINEMATOGRAPHY
War Horse and The Tree of Life (tie)

BEST EDITING
The Girl With the Dragon Tattoo

BEST VISUAL EFFECTS
Rise of the Planet of the Apes