The Oscars have wrapped, and this year's big winner is indisputably The Artist with several wins, including best picture, best director, and best actor for Jean Dujardin. Besides The Artist, there were a few other awards season frontrunners that continued their streak, but there was also a surprise or two during the show (yay Meryl!). 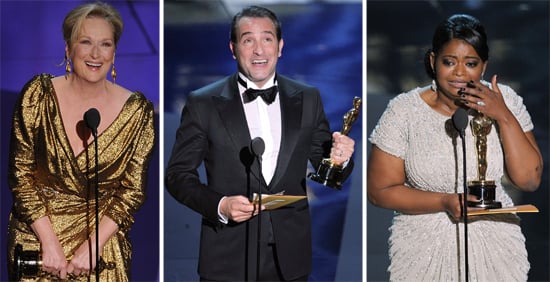 To relive the evening and see the full list of winners, just keep reading.

BEST ACHIEVEMENT IN FILM EDITING
The Girl With the Dragon Tattoo, Kirk Baxter and Angus Wall

Award Season
I'm Canadian, and Here's How Schitt's Creek Winning 9 Emmys Made Me Feel
by Simrin Purhar 3 hours ago

Celebrity Beauty
The Beauty Looks at the Emmy Awards Were So Good, We Almost Forgot It Was All Virtual
by Jessica Harrington 22 hours ago

Award Season
Don't Miss Out! Here Are 50 of the Very Best Pictures From This Year's Emmys
by Haley Lyndes 23 hours ago