Kanye West and Jay-Z's collaborative album Watch The Throne helped the duo score six Grammy nods each this year, but they've got some pretty stiff competition; Frank Ocean, fun., Mumford & Sons and The Black Keys also picked up six nominations apiece. The nominee love was pretty spread out overall, though: ubiquitous songs like "Call Me Maybe" and Gotye's "Somebody That I Used to Know" got some love — three nominations for Gotye, including record of the year! — as did perennial favourite artists like Taylor Swift, Rihanna and Kelly Clarkson. 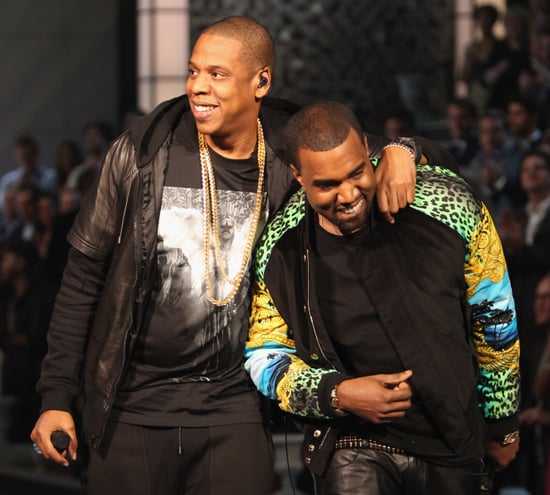 The Grammys will air on Feb. 10, but check out some of the biggest categories when you keep reading.

RECORD OF THE YEAR
"Lonely Boy," The Black Keys
"Stronger," Kelly Clarkson
"We Are Young," fun. feat. Janelle Monae
"Thinking About You," Frank Ocean
"Somebody That I Used to Know," Gotye
"We Are Never Ever Getting Back Together," Taylor Swift

SONG OF THE YEAR
"The A Team," Ed Sheeran
"Adorn," Miguel
"Call Me Maybe," Carly Rae Jepsen
"Stronger (What Doesn't Kill You)," Kelly Clarkson
"We Are Young," fun.

BEST POP PERFORMANCE BY A DUO OR GROUP
"Shake it Out," Florence + the Machine
"We Are Young," fun. feat. Janelle Monae
"Somebody That I Used to Know," Gotye feat. Kimbra
"Sexy and I Know It," LMFAO
"Payphone," Maroon 5 feat. Wiz Khalifa

BEST ALTERNATIVE MUSIC ALBUM
The Idler Wheel Is Wiser Than the Driver of the Screw and Whipping Cords Will Serve You More Than Ropes Will Ever Do, Fiona Apple
Biophilia, Björk
Making Mirrors, Gotye
Hurry Up, We're Dreaming, M83
Bad as Me, Tom Waits

BEST COUNTRY SONG
"Blown Away," Carrie Underwood
"Cost of Livin'," Ronnie Dunn
"Even If It Breaks Your Heart," Eli Young Band
"So You Don't Have To Love Me Anymore," Alan Jackson
"Springsteen," Eric Church

Music
Wondering Why You Recognise That Scary Music in Ratched? It's Pulled From a Classic Thriller
by Hedy Phillips 17 hours ago

Music
Lady Gaga's "911" Video Is a Powerful Statement About Mental Health: "It's the Poetry of Pain"
by Monica Sisavat 6 days ago