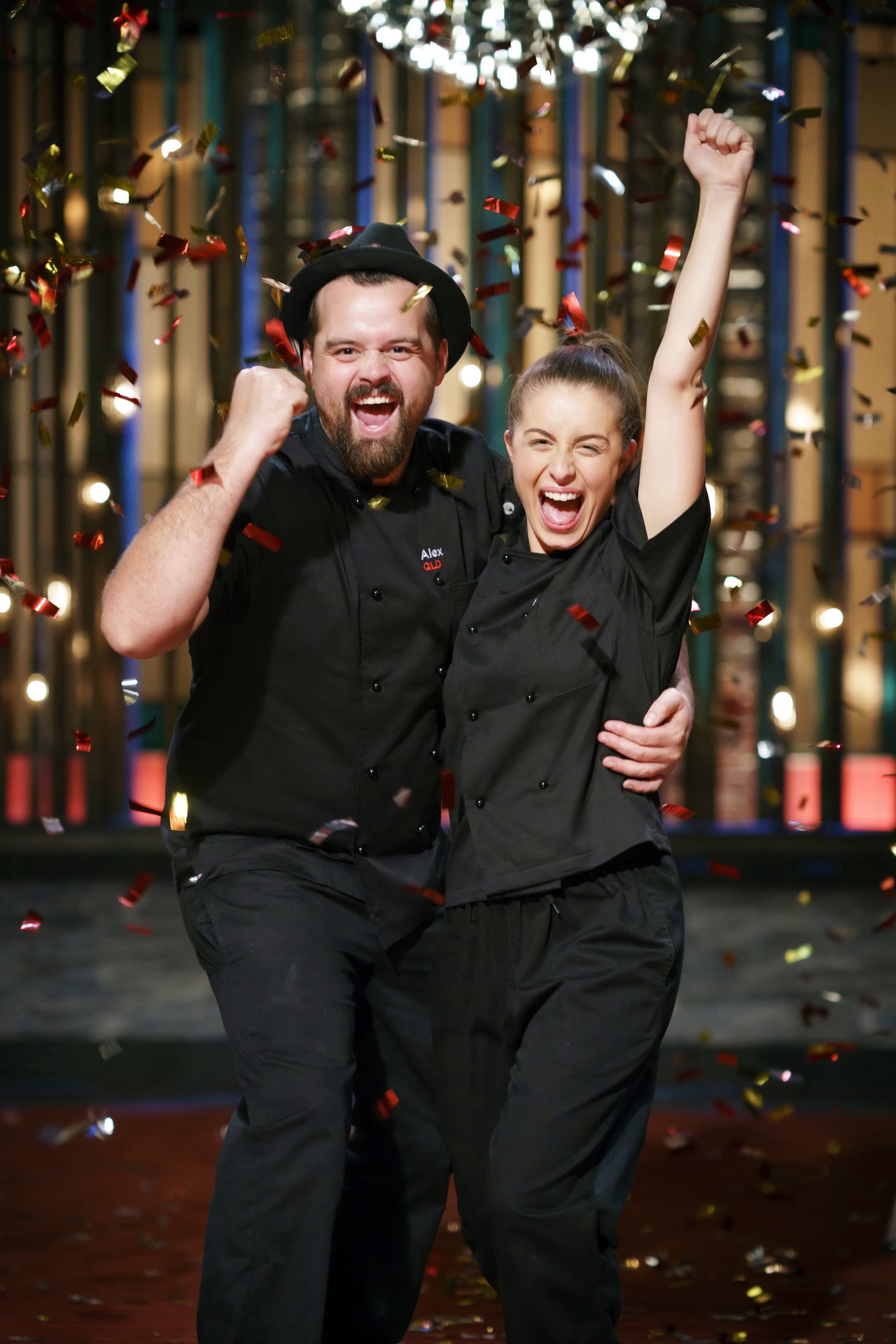 The 2018 My Kitchen Rules champions have been crowned, with Queensland couple Alex and Emily beating out mothers Kim and Suong by three points in Sunday's grand final.

It was a close match-up, with both teams serving up dishes that the judges could barely fault — that penicillin dessert? Next level. Here's what Alex and Emily had to say about getting to the end, this season's drama and their plans to open a place of their own.

Related:
Kim and Suong on How MKR Made Them Stronger Women

On taking out the title . . .
Emily: "Last night was amazing, and it's all been a bit of a whirlwind since. It hasn't all sunk in just yet, but in a couple of days, it will and start to feel real."

On their grand finale experience . . .
Emily: "Alex and I definitely didn't expect to win. We knew that Kim and Suong cooked really well on the night, they were on their A-game and it was the final, and we knew they were going to bring it. So at no point did we think we had it in the bag by any means, but I think the only thing that made us feel like we were slightly ahead was our dessert. The whole way through the cook, we were on par and both teams cooked spectacular dishes, but I think when it came down to the dessert, I was really proud of what Alex and I put up."

On what inspired their grand final menu . . .
Emily: "Alex and I really wanted to showcase a whole different range of cuisines in our own quirky, creative way. We wanted to show the judges that we'd learnt so much, because we'd cooked Asian cuisine in our Ultimate Instant Restaurant and semi-final, and thought that we should go back and sort of do a modern Australian-inspired menu, but with an Alex and Emily twist."

On the dishes their most proud of . . .
Alex: "The semi-final was definitely up there for us, we got a 10 from Pete and are so proud of that. Getting the high score then was a big moment for us. We just didn't know how it was going to pan out last night but of course, are so happy with the result."

On what allowed them to pull through to the end . . .
Alex: "I think just hard work. We knew we weren't the best cooks in the competition by any means, so if we were going to get to the end and the grand final, it would have to come down to sheer hard work. I'm pretty confident in saying that we were one of the top teams that worked the hardest to get to where we wanted to go. We were up late nights and early mornings cooking, practicing, studying, watching Youtube, reading books . . . Anything and everything we could. Our whole hotel room was just covered in notes and things stuck to our kitchen walls to memorise. Emily would just plan out a whole cook down to a tea, which is why she got so fiery and passionate, because if we veered off what we planned and practiced, then she'd get quite upset, which is what we saw on TV. But no one really sees the hard work we put in, which is why it comes across a bit out of context — it's all because we put so much hard work in that we want to see it succeed."

On Emily's breakdown in the grand final . . .
Alex: "The grand final was filmed over two days. We did the first three courses, went home, practiced, cooked all night, had an hour's sleep and then got back into the studio at 5:30 a.m. We only had an hour's sleep after cooking all night and obviously stressing about the last two courses that we had to cook that day, so the first cook back, which is the one she broke down in, was sheer exhaustion. She was just exhausted. It wasn't much in comparison to what we'd seen in other episodes at Kitchen HQ, but it was just one of those things where she was just exhausted."

On what surprised them about being on the show . . .
Alex: "The drama this year. We're massive fans of MKR, and it's all about cooking and people. But we found that it was a bit of a surprise this year how heavily they focused on the drama, which we just didn't want to be a part of. We tried to stay away from it as much as possible, sometimes it was unavoidable, what with Emily and I being situated in between two people going at it. So that was very surprising to us, we weren't prepared for that."

On the Sonya and Hadil situation . . .
Alex: "It's really unfortunate. It's really sad and we understand what it's like, even on social media for those girls, with how attacked they are. There were certain things said, but at the end of the day, there are ways things are perceived on TV with editing, which we can definitely sympathise with."

On what they plan to do with the money . . .
Alex: "We don't really want to jump straight into opening our own place yet. We would love to, but we really like the idea of doing a pop-up [first] to test a product we really want to push out to people. It's sharing food, tapas-style, but more for grazing. So having food and drink on the menu together — you order a drink to match your food — which you have now with wine, but I would like to focus on cocktails. Obviously being the cocktail couple, it's what we love to do, and what we do for a night out."