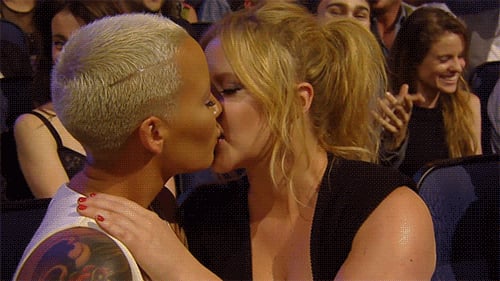 MTV Movie Awards host Amy Schumer got very, very close to Amber Rose during the show on Monday. In GIFs posted on MTV's Tumblr account, the pair is seen making out in the audience. Amy and Amber locked lips, with Amy eventually pulling back and smiling while those around them applauded. This isn't the first time the pair have linked up, as Amber appears in the teaser for the new season of Inside Amy Schumer. The GIFs of the pair's lip lock have been taken down and it hasn't been seen on the broadcast yet, but keep reading to watch the moment below, then be sure to check out all the celebrities on the MTV Movie Awards red carpet plus this year's list of winners.