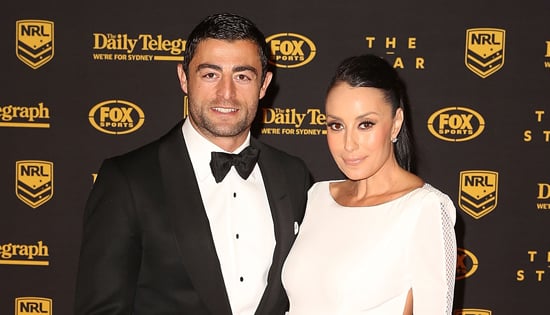 Terry Biviano and Anthony Minichiello are the proud new parents of a baby girl. The Daily Telegraph reports that Terry went into labour on Monday night and gave birth to their 3.65kg daughter just after 9 p.m. at the Mater Hospital in Sydney’s north shore. The news was shared with their friends via a text that read, "Filling our arms with love and our hearts with joy, we proudly announce the birth of our beautiful daughter! Both girls are doing well. Thrilled parents Terry & Anthony." They are yet to release a name for the baby.

While Anthony has been in and out of the country for his sporting commitments, Terry remained a regular on the local social scene and showed off her pregnancy style in an array of designer looks. The couple made their last glamorous red carpet appearance together at the Dally M Awards in October. Congratulations to Terry and Anthony!

Annie Murphy
Who Is Annie Murphy's Husband, Menno Versteeg? He Has an Impressive Resume
by Corinne Sullivan 5 hours ago

Dua Lipa
Dua Lipa and Anwar Hadid Are Legit Adorable, But He's Not Her First Famous Boyfriend
by Emily Weaver 2 weeks ago