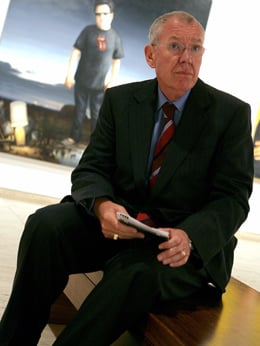 Veteran journalist Peter Harvey, 68, lost his short battle with pancreatic cancer last night, just five months after being diagnosed while on holiday in Italy with his wife. The legendary Nine News reporter and writer, whose popularity was elevated to an almost cult-like status thanks to his recognse-it-anywhere voice and award-winning talent, fought the battle with his trademark positivity and lightheartedness intact.

In a touching tribute, his daughter, The Daily Telegraph journalist Claire Harvey wrote that she felt blessed to have had a chance to say goodbye. "We had a long, sweet, precious goodbye," she writes. "Everything was said. Dad cracked bad jokes. He texted his buddies and tweeted. He told everyone — especially Mum — he loved us, over and over. 'Every day's a great day,' he said one evening as we said goodnight at the hospital." Our thoughts are with Peter's family and friends.