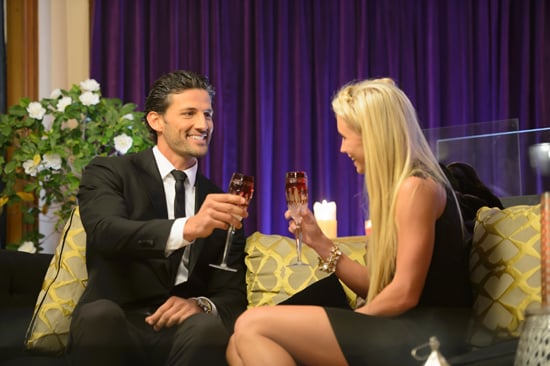 Did you watch The Bachelor? The dating show premiered on Network Ten last night and had Twitter going nuts as the nation was introduced to Tim, the 30-year-old chiropractor looking for love, and 25 single ladies vying for his time and attention. The opening episode threw Tim and all the girls together at a fancy cocktail party held in the extravagant girls’ mansion — add in champagne, feisty personalities and anxious single women, and you’ve got the recipe for drama. Here’s what got us talking:

The Girls
25 girls made their way down the long red carpet to meet Tim for the first time. Most of them understood the importance of first impressions, but it’s not just about Tim — it’s also about who the viewer will get on-side with and cheer for. They were dressed to the nines and perfectly coiffed, and there were definitely some standouts — but not all stood out for the right reason. (26-year-old lawyer Anna experienced the dreaded red-lipstick-on-teeth conundrum, yikes.)

As the episode went on, we got to know some of the girls better, including some who had no shame about how they were going to get Tim’s attention. 27-year-old real estate agent Ali went in for a kiss after snagging a second round of alone time with Tim, but he wasn’t ready — ouch. Belle gifted Tim with rose quartz because of its energy. 22-year-old Sarah described her fantasy wedding to Tim within minutes of getting to know him, which obviously impressed him as he gave her the second rose.

It will take a while to be able to differentiate some of the rest of the girls, but we have a feeling the ones who flew under the radar could be the ones with staying power.

More of our thoughts on the first episode when you keep reading.

The Mansion
The keyword for the styling must have been OTT, with flowers, candles and tea lights as far as the eye could see. Fire fighters must have been on standby — there’s a lot of risk involved with candles and 26 liquored-up people!

The Date Crashers
By far, the most entertaining and awkward moments of the episode were the date crashes. As Tim singled out girls for some getting-to-know-you time, some girls couldn’t bear watching him chat up one particular lady as they were left to mingle with the rest of the girls. So they would approach him and ask to join the conversation, becoming awkward third wheels in the process.

Laura's Anxiety
Poor Laura. The 24-year-old customer relations worker could not catch a break, which made her more nervous as the cocktail party went on and she realised she hadn’t had any alone time with Tim. Unlike some of the other girls, she didn’t have the nerve to crash other girls’ dates, and was often overlooked as Tim would ask the girl sitting next to her for some time. Still, Tim must have seen something in her as he handed her the last rose in the rose ceremony.

Joelene
Blonde and brazen, this 23-year-old hairdresser had her own soundtrack (did you notice her music played differently to everyone else’s, from the moment she walked the red carpet?) and set of rules when it came to winning over Tim. She was also involved in the OMG moment that had been heavily promoted in ads — when her alone time with Tim didn’t result in a pre-rose ceremony rose, she walked over to 28-year-old doctor Judy, recipient of Australia’s first rose, and apparently knocked her to the point that the rose was split in half. OK, to be honest, the show’s editing meant we didn’t actually see what happened. But according to the other girls’ reactions and Judy’s broken rose, Joelene had something to do with it . . . right?

How Tim Handled Everything
It would take a level-headed, mature man to be able to deal with being thrown into a cocktail party with 25 single women eyeing him off, and Tim did a great job of making the girls feel comfortable in their speed dates. He was certainly charming, kept calm amongst the craziness, and seemed to say all the right things, as all the girls wanted him more as the night went on.

The Bachelor continues tonight at 7:30 p.m. on Network Ten.