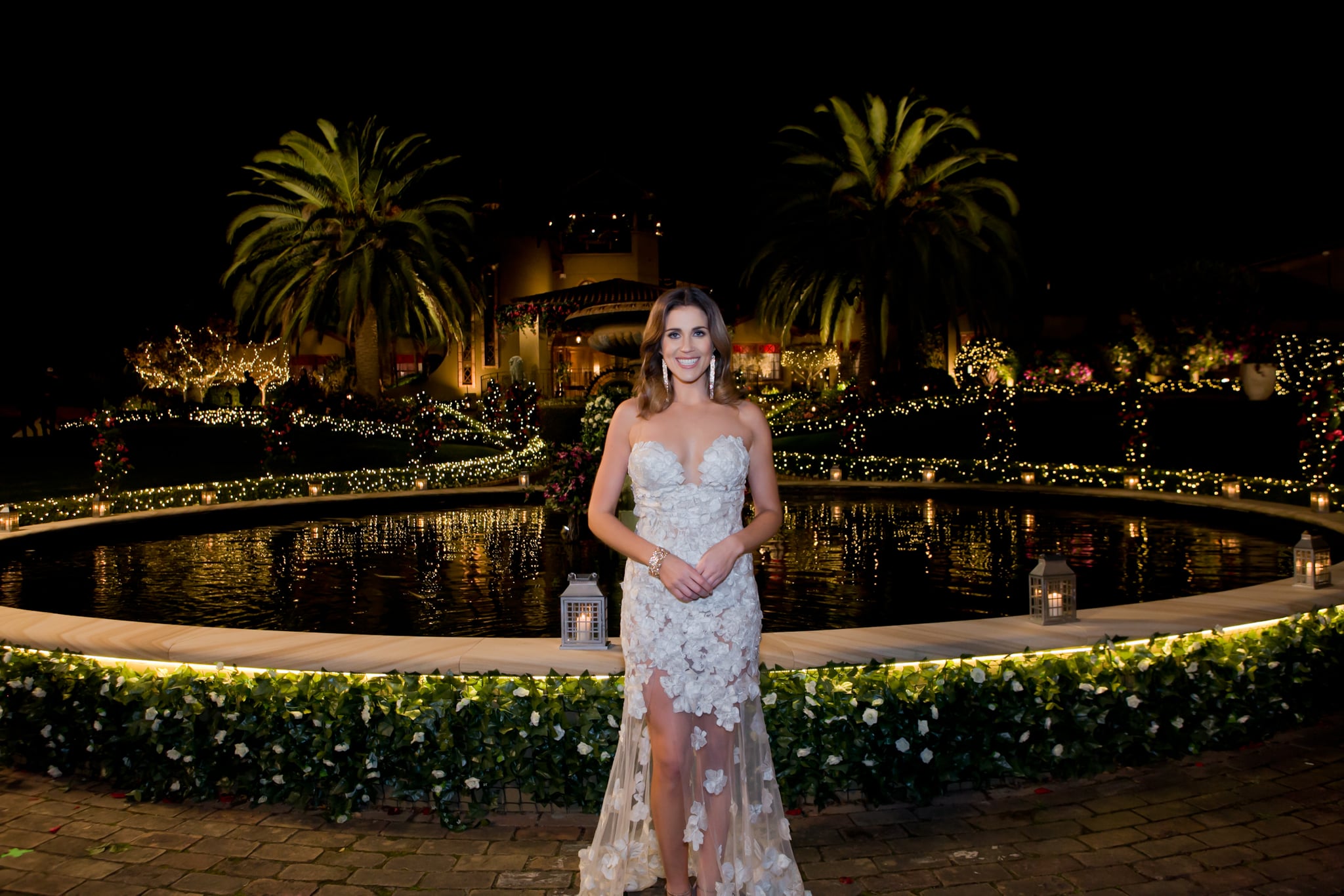 Australia is back and we're covering every important detail! Stay tuned here for all the big moments from the first episode.

7:31 p.m. The opening sequence treats us to a look at what's to come from Georgia and her 16 potential suitors. And HOLY SMOKES it looks like such a fun time!

7:33 p.m. It's been ages since we had a Bachelor or Bachelorette we didn't know beforehand — we've missed the mystery and the excitement of getting to know a new star!

7:36 p.m. Osher is back — what is this show without Osher Gunsberg, really? — and Georgia Love is officially introduced to the world. Love seeing her in newsreader mode, it's fun to hear her voice switch to 'serious mode."

7:37 p.m. Georgia talks about why she's on the show — she's got everything else lined up, and the only thing missing is love. As she says, "It's a huge gamble," but she's willing to take the risk.

7:38 p.m. Georgia tells the camera her beloved mum has been diagnosed with pancreatic cancer, which put everything in Georgia's life in sharp perspective. Seeing her dad look after her mum also made Georgia realise she wants a partner like that in her life — it's a seriously heartfelt moment and suddenly we're desperate for Georgia to find it. Please let there be a good man in the line-up for her!

7:43 p.m. We're dying to meet the men but we gotta wait for Georgia to have a little chatty with Osher. They talk work, love, sparks, love, chemistry, love . . . We have a feeling the next couple months will be the most we've ever written the word 'love'.

7:48 p.m. First man off the rank is Cameron, a firefighter from Perth (people from Perth tend to do well on this show so we shall keep this guy front of mind). He's, as my grandmother would say, a dish. Georgia's first remark to him is that he's tall. We'll chalk it up to nerves, yeah?

7:51 p.m. Georgia told us she was HELLA nervous when she was meeting the guys — good to remember, 'cause she seems very cool, calm and collected! Cameron is very taken with Georgia.

7:54 p.m. Jake is up next and he's cuuute too. Very different to Cameron, but equally attractive. They seem to hit it off really well. She comments on his great eye contact and seriously, the guy doesn't waver. It's very intense. Georgia says she "definitely, definitely" wants to spend more time with him. Oooh.

7:57 p.m. Rhys, the model, is speaking French. Not sure why, but he thinks she appreciated it. We'll see!

8:00 p.m. Courtney is heeeere — we dig his dimples. Will Georgia? Time will tell, right? Courtney is funny . . . He's telling a story about falling for a girl in Year 2 and how he made her a pasta bracelet — and then he presents Georgia with one of her own. CUTE. Georgia's rather interested in him, but I'm not sure if it's romantically yet?
8:01 p.m. Dale presents Georgia with a rose, Ryan gives her a survival kit (chocolate was in there, he wins), Matt made her a mix tape on an iPod shuffle (where did he find a relic like that?) . . . And then the music changes and Carlos is on the scene. We quickly get an explanation for the sudden porno music: Carlos is a stripper. LOL. We love it!

8:03 p.m. Carlos presents Georgia with a Tiffany & Co. box, with one of their iconic bracelets inside. She likes it but . . . he seems a little flashy for Georgia? He's all about the money and the bling, but he seems like a good guy!

8:06 p.m. OK and Lee arrived with a donkey so he obviously wins this thing. They exchange terrible dad jokes, he makes sexy eyes with her, he puts his jacket around her shoulders and she is smitten. He's top three, mark our words.

8:08 p.m. Aaron, Jay, Tommy, Matt . . . They all roll in looking hot in their suits and Georgia's feeling the love. Ben arrives to some upbeat country tunes which puts a pep in our step. He arrives in a bright blue suit, falls over and says, "I'm falling for you already." LOL. Oh my God, OK — he just told Georgia he did three nervous poos before arriving. Ha! Wow. Honesty is the best policy? Ben, the funny thing, he's convinced he killed it.

8:10 p.m. Clancy arrived and is all suave and stuff. Too suave? We'll wait to judge. He brought a shaver with him so that Georgia can shave his beard off if she doesn't like it. It's clever because she says, "I'll have a think and come and find you!" Worked like a bloody charm, that did.

8:13 p.m. Sam has finally arrived, and we know from the ads that he's going to be an amusing one to watch. He's into his appearance, he's not used to chasing women and he's allergic to cats. This is troubling because Georgia has a beatiful cat named — wait for it — Pawdrey Hepburn.

8:14 p.m. We may be speaking too soon but we are finding Sam HILARIOUS. Also, now is when the fun begins. Sam is the last guy in so it's time for all the guys to mingle. YES. Bring it. Sam says he is his biggest competition. So, there's that.

8:20 p.m. The boys are chatting, there's lots of banter flying around — but it's time for Osher to introduce the woman of the hour, Georgia. The guys are so pumped to see Osher. Before he brings Georgia out, he introduces the "First Impression" rose. It's yellow-ish and whoever receives it is safe through tonight's rose ceremony. The First Impressions rose also gives the recipient power over the first week of dates — so it's a good prize! The men are immediately competitive.

8:22 p.m. And boom, Georgia hits the deck. She slips down the stairs, but she doesn't spill a drop of alcohol. The boys are incredibly impressed by this. Haha, of poor Georgia — she handles it so well!

8:25 p.m. Jake was the first to approach Georgia on her own and it's a good move. After that the guys battle to get their time with Georgia. They're literally lined up. Stand out straight away: Cameron, because he's a mad Disney fan like Georgia. Cute. Sam's up next and he seems a little nervous! They get right back into the quick questions and they have different opinions on EVERYTHING. Uh oh.

8:40 p.m. The party seems a little stale so Rhys decides to start showing off some yoga moves. The rest of the guys are awkward as hell about getting some one-on-one time with Georgia and it's HILARIOUS to watch. Courtney is emerging as a real threat — Georgia really likes him and finds him very interesting. In fact, she says she's impressed by him! Oooh.

8:50 p.m. Georgia decides to shave Clancy's beard and to he honest we're just amazed no one got hurt. Clancy looks great without the beard and Georgia is RIGHT into it. He's suddenly a bit of a contender methinks!

8:59 p.m. Wow, Courtney got the First Impression rose! Ca-ute, the pasta bracelet must have worked.

9:06 p.m. Rose ceremony time! Two men will go tonight — but it's not Courtney, Lee, Cameron, Clancy or Jake. They're all first through.

9:10 p.m. She works through the roses until there are two men left behind — and poor Carlos and Dale are left without one. They're the first two to be eliminated from The Bachelorette 2016!