Brad Pitt gave an intimate interview to USA Weekend in which he revealed details about his family life at home with Angelina Jolie and their six kids. His new movie The Tree of Life has been getting largely positive reviews after winning the highest honours at the Cannes Film Festival last week. The film deals with some heavy questions, and Brad talked about his kids, finding private time with Angelina, and marriage. Here are highlights: 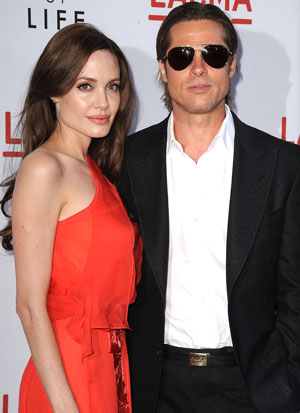 On finding time with Angelina: "There are no secrets at our house. We tell the kids, 'Mum and Dad are going off to kiss.' They go, 'Eww, gross!' But we demand it."

On marriage: "The kids ask about marriage. It's meaning more and more to them. So it's something we've got to look at."

On the chaos of six kids: "Angie and I do everything we can to carve out some semblance of normalcy for them, to re-create the kinds of moments that were special for us. It's not unusual for the kids to be covered in paint. We have mud fights. It's chaos from morning until the lights go out, and sometimes after that."

Tell us what you think about Brad's quotes — cute or awkward?