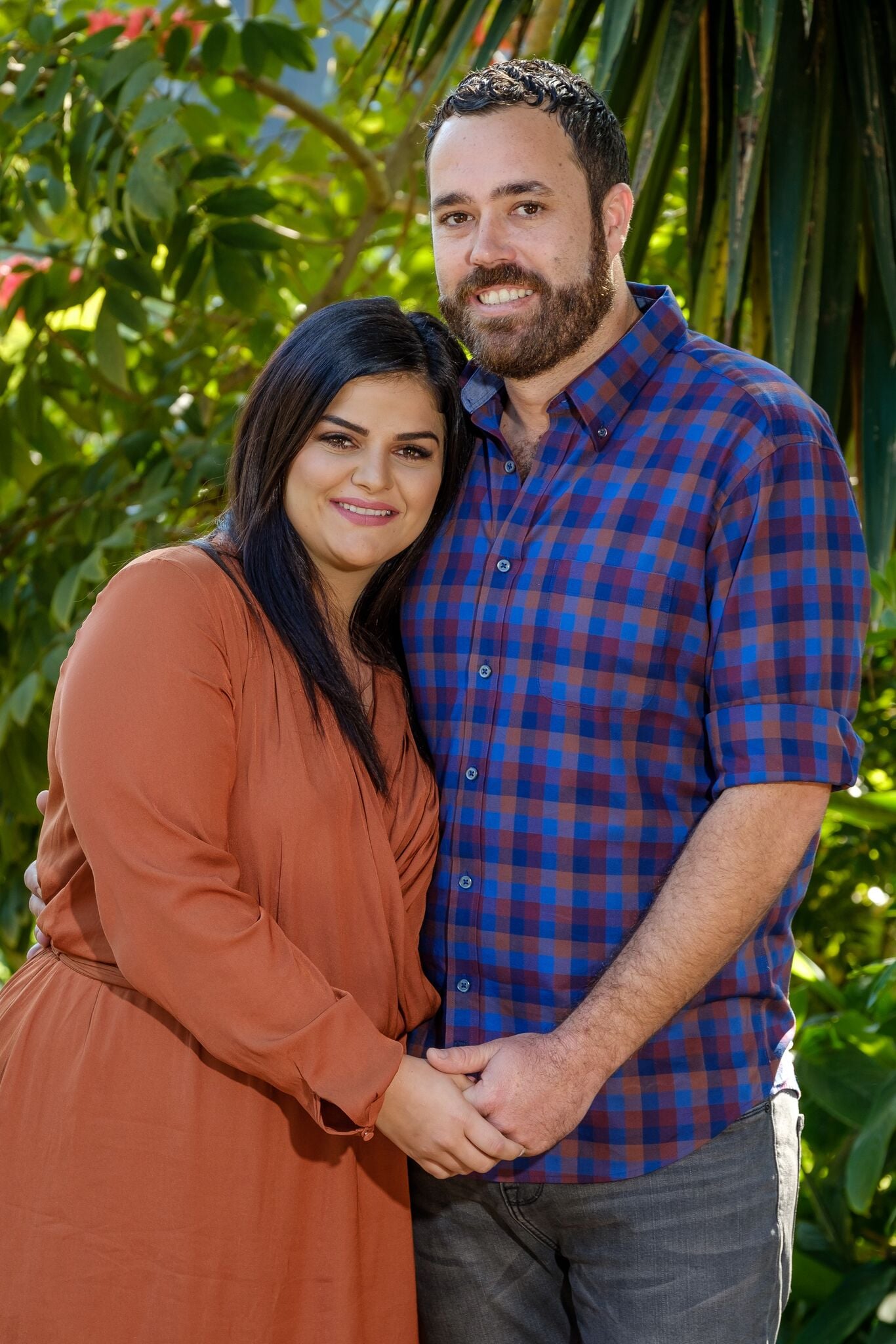 It's episode six of Bride and Prejudice and first of all it's time for us to witness all the fallout from the results of Simon's lie detector test he took in the last episode. It is revealed that his answer as to whether he had drunk any alcohol in the last ten months since he has claimed to be sober was "deceptive." Simon argues that if this were true then he would have relapsed as he has "no self control," and that if he'd been caught out in a lie then he'd be "a lot more defensive than I am right now." However, Izzy's mum Bobbi isn't having it, and tells him he needs to own his lies. "I'm capable of lying, I'll probably have lied to someone by the time the afternoon is over, but I wouldn't lie to Izzy," he says, in what doesn't exactly seem like a solid argument for his case. Bobbi says that all the lie detector test has done has validated her concerns with Simon. However, she still reaches out to Izzy by gifting her a necklace she wore when she was pregnant with her that symbolises her love, a gesture which causes Izzy to promptly burst into tears. Izzy is torn between wanting to be with Simon and the guilt she feels over her mum and best friend's disapproval. Bobbi tells Izzy, "I will be there for your joy, but it may not be at this point in your life." To the camera, she adds, "I just can't walk her down the aisle," and meanwhile Izzy walks off into the distance, crying uncontrollably, while Simon lingers behind. Talk about tense!

We then move on to Philippa and Ry, and Philippa ain't happy about her parents' near-constant insistence that Ry is a gold digger, leading to them pressuring him to sign a pre-nup in the last episode. Although Ry agreed to it at the time, Philippa is resisting, asking, "can't you accept we actually love each other?" . . . well, apparently not!

We move swiftly along to Jess and Seyat, and it's now or never for Seyat to actually stick up for Jess against his kind of scary mum, Fatima. It's the first time he's seeing them since Fatima tried to bribe Jess into leaving him, just casually. Fatima opens with, "I feel like you're marrying a witch and she put a spell on you," so clearly she's being low-key this episode, as per usual. "If Jess had said yes to the money, I'd have never talked to you again," says Seyat. Fatima even manages to find a way to blame Jess for this, saying that he has never spoken to her like that before and that she must be controlling him. Well, gotta hand it to the woman, she's persistent. Jess says she is proud of Seyat at least, even if trying to reason with Fatima seems like it'd be comparable to talking to a brick wall.

Now it's Melissa and Aalden's turn to catch up with Melissa's family, after Aalden also completed a lie detector test. We know things are about to get hectic real quick as Melissa's sister Rachel has already started to cry before she even begins to read the results out. It is revealed Aalden apparently lied about being willing to receive gambling addiction treatment, as well as having not gambled full stop. But apparently this is water off a duck's back to Melissa, as she knows he has gambled. But the bombshell drops when it is revealed he lied about having pursued a relationship with anyone else while still with her. "All I can say is that I'm very, very surprised to hear that," Aalden says, "I can swear on my life on that." However, whether right or not, Melissa believes Aalden and they drive off together happily. Well, guess time will tell if that's the right decision.

It's now Hank and Lily's turn for the parental showdown, and Hank isn't happy with the line of questioning his parents fired at Lily last night. He says he wants to save talking about their issues until they can do it in front of the therapist. "Don't you think you're even capable of talking about something without losing it? You're not giving yourself any chance at all" asks his dad, Terry, all with a "smug look on his face," as Hank points out. This causes Hank and Lily to walk out, and Hank throws in a bleeped-out swear word in as he exits, for good measure.

We now see Ange and Dylan meet with Ange's dad, John, along with the therapist. Ange says she plans on proving to her dad that is she gay and isn't just confused, or attracted to women as her mum passed away when she was young, as John believes. "I don't want you to think that you could have changed anything, because you could not have," Ange says. She says she tried to fight her feelings due to being deeply religious, but that she exhausted all options before she finally accepted herself for who she was. "God is about love and acceptance, he doesn't want to outcast anybody," she says, which John surprisingly replies with "very well put." "I see the way you struggled and battled with it, and I can imagine how tough that would have been." He now says he realises she had to deal with it on her own, as he wasn't seeing what she was saying. Ange says while she feels like all their previous conversations have fallen on deaf eyes, she now feels like they might have made a break through. I don't want to speak too soon, but this actually looks promising! Hopefully it's not too good to be true.

We now move on to another therapy session with Izzy, Bobbi and Amanda, and notably without Simon. Izzy says she isn't willing to choose between any of them, although she feels like she's disappointing them. "How can loving someone and wanting to spend the rest of my life with them feel like wrong?" she says, and that's the million dollar question right there.

It's now time for the couples dinner party, which involves all the couples have a good old fashioned gossip about each other's families. Everyone seems jovial, except for Izzy and Simon, which the other couples pick up on. Seyat decides to take the totally mature and helpful approach to the situation by asking Simon who in the room he'd pick to have a one night stand with, if given the choice. Apparently he's taken a leaf out of his mum's trouble-making book. "What a dull and boring idea that I'd only pick one person," says Simon, which doesn't exactly seem like the most ideal answer, even if they are in a non-monogamous relationship. Dylan is confused why they want to get married when they seem very "non-coupley," and questions whether Izzy is scared to go through with the marriage.

We cut back to the family therapy sessions, and it's Jess and Seyat's turn. The therapist seems to think Fatima's harshness stems from her fear of Jess stealing Seyat away, and her inability to accept he's an adult now. She asks Fatima and Seyat to stare into each other's eyes, to help assure Fatima of their bond. Fatima starts crying almost immediately, and admits she has to let Seyat go and let him be an adult. Finally! Some progress! What a revelation.

But of course we can't conclude the episode on that uplifting note, and Hank and Lily are last up for the therapy session. Hank urges his parents stop deliberately riling up Lily with their differing opinions. "Lily is insulted when I talk about homosexuals like I do," and it seems we'd rather not know what "like I do" means. Terry insists that "90 per cent of Australians would agree with his views," and I demand a fact-check there. Even Hank's mum Margaret has had enough, and tells Terry he needs to learn to give and take. "Go mum," says Hank, while Terry says nothing. "You know have to decide which is more important, your opinions or your family," says the therapist, Terry decides not to back down . . . "I'm going to maintain my view probably until I die."

Well, on that note, until next week!

Related:
Here's Where You Can Follow the 2018 Bride and Prejudice Couples on Instagram
Image Source: Channel Seven
Join the conversation
TVBride And PrejudiceAustralian TVReality TV
More from POPSUGAR
From Our Partners
Related Posts

SAS Australia
SAS Australia Premiered Last Night And the Internet Agrees, It’s the Reality Show We All Deserve
by Bree-Grant 13 hours ago

SAS Australia
Roxy Jacenko Silences Trolls by Revealing the Real Reason She Quit SAS Australia, "My Health is My Number One Priority"
by Bree-Grant 16 hours ago

TV
Lovecraft Country Ended Its Frenzied First Season on a Cliffhanger, So Now We Need Season 2
by Mekishana Pierre 16 hours ago

TV
Season 2 of The Vow Is Coming in 2021, and Here's What It'll Be About
by Monica Sisavat 17 hours ago
Latest Celebrity
×