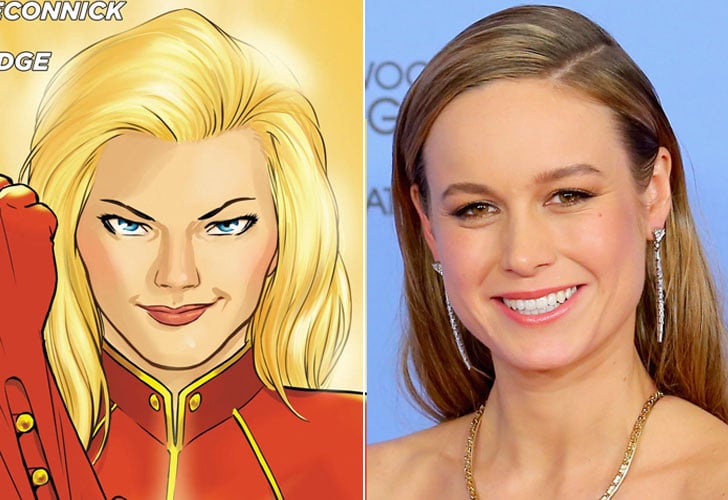 By now, as I'm sure you're painfully aware, Avengers: Infinity War wraps up on a heartbreaking note: Thanos fulfills his mission of obtaining all six powerful Infinity Stones and vaporises half of the universe's population with a literal snap of his fingers. That means some of our beloved Avengers turn to dust before our eyes, including S.H.I.E.L.D.'s Nick Fury (Samuel L. Jackson) and Maria Hill (Cobie Smulders). Their deaths go down in the film's sole post-credits scene, one that sneakily sets up 2019's Captain Marvel.

Once you recovered from the shock of seeing the new hero's red, yellow, and blue symbol flash on Nick Fury's beeper, you might have had a few questions. First, where does one purchase a beeper in this day and age? And second, since Captain Marvel — aka Carol Danvers — comes into her powers in the '90s, how is she going to zip up to the late 2010s to help take on Thanos and save the universe? Can she time travel or what?

Captain Marvel's powers are pretty important, as far as the MCU is concerned. In fact, she's so damn important that the Avengers have basically no chance of defeating Thanos without her. Her film, which stars Brie Larson as Danvers, isn't coming out for quite a while, but it will presumably track her rise from an Air Force pilot into one of the most powerful cosmic beings the world has ever seen. The exact nature of how she'll develop her abilities in the movie is murky, but using her comic backstory, we can assume it will involve her DNA being fused with a Kree warrior's (an alien race) and an interaction with Mar-Vell (aka Doctor Walter Lawson, who will be played by Jude Law).

Her newfound abilities will include enhanced durability, speed, flight, inhuman strength, and the power to shoot unbelievably powerful energy bursts from her hands. The one thing she doesn't possess is the ability to travel through time whenever she pleases, which makes her scheduled appearance in Avengers 4 a little tricky. Although she can't time travel in the traditional sense (or in the way Doctor Strange can, with the Time Stone), there's still a way she'll be able to skip over a few decades to aid the Avengers post-Thanos.

Related:
Here's Who Makes It Out of Avengers: Infinity War in One Piece

Given Captain Marvel's enhanced durability and other powers, it stands to reason that she could survive a trip through the quantum realm first introduced in Ant-Man. A popular theory about Avengers 4 posits that Ant-Man and the Wasp will discover doorways to alternate universes in the quantum realm in their upcoming sequel. If they do, Scott Lang (Paul Rudd) and Hope van Dyne (Evangeline Lily) could become vital to Captain Marvel's mission. The connection has already been hinted about by real-life quantum physicist and Marvel consultant Dr. Spiros Michalakis, who told Inverse in 2017 that the quantum realm will play a major part in both Ant-Man and the Wasp and Captain Marvel.

"This is exciting for the future. There are different ways that some of these ideas appear on-screen in a few years," he said. "Not just for Ant-Man, but also for Captain Marvel and all of the Marvel Cinematic Universe."

Dr. Michalakis further elaborated on this idea in a 2015 blog post:

"If someone could go to a place where the laws of physics as we know them were not yet formed, at a place where the arrow of time was broken and the fabric of space was not yet woven, the powers of such a master of the quantum realm would only be constrained by their ability to come back to the same (or similar) reality from which they departed. All the superheroes of Marvel and DC Comics combined would stand no chance against Ant-Man with a malfunctioning regulator."

So, keeping all this in mind, it sounds like anyone who has the ability to withstand (and somewhat master) the quantum realm could also be powerful enough to take on Thanos. What we don't know just yet is how Nick Fury's beeper message gets through to her — does she receive it in real time (the present), or is the beeper deceptively high-tech and able to send messages to the past (the '90s, when her film is set)? We can't know for sure, but since the premiere of Ant-Man and the Wasp is only a few months away, hopefully we won't have to wait too long to find out.

Movies
The Lord of the Rings Cast Virtually Reunited, and I *May* Have Just Whispered, "My Precious"
by Brea Cubit 5 days ago