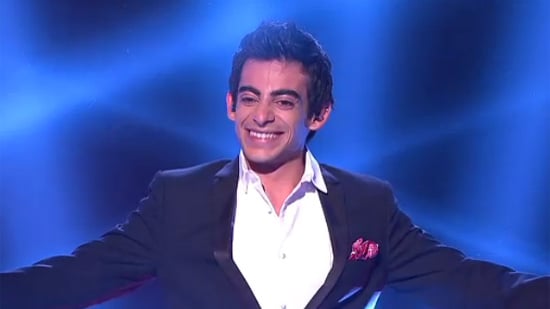 Carmelo Munzone has been given a second chance at achieving his music dream after last night’s reveal that he is the mystery contestant re-joining The X Factor. Carmelo is replacing Josh Brookes, who was disqualified last week for inappropriate social media behaviour, meaning Mel B’s group of under 25 males is back to two contestants, since Adil Memon was the first contestant to be eliminated. (The show didn't go into why Josh was asked to leave.) Carmelo’s return was announced at the beginning of the live show, and then around halfway through the broadcast he took the stage to sing Jamie Callum’s “Everlasting Love” for the show’s ‘Party All Night’-themed week. Mel B and the other judges, Ronan Keating, Natalie Bassingthwaighte and Guy Sebastian, praised Carmelo’s performance and the fact that he’d only had two days of rehearsals. Ronan said, “Well done and welcome to The X Factor,” with the others echoing that Carmelo was the right person to come back. On his second chance, the always-smiley Carmelo said, “This last week has been insane and completely awesome.”

It wasn’t just Carmelo that had people buzzing about the show last night. While there was no shortage of performances that got audience members in the party mood — particularly Fourtunate singing The Jackson 5’s “Blame It on the Boogie,” Nathaniel Willemse’s version of Jamiroquai’s “Canned Heat,” and The Collective closing the show with “Footloose” — there were disagreements on the judging panel over Bella Ferraro’s performance of One Direction’s “What Makes You Beautiful.” Natalie changed the pop arrangement to have more of an “old school prom” feel, which had the other judges, especially Mel B, questioning whether it was ‘party’ enough, and how the contestants should be stretched out of their comfort zones to match the different themes each week. Natalie defended her decision and said it was about tailoring the song to match the “artist.”