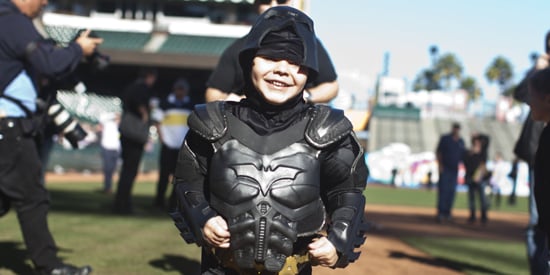 Is Ben Affleck worried about the Batman competition? On Friday, #Batkid became a top trend when San Francisco transformed into Gotham City to fulfil the wish of 5-year-old Miles Scott, a child who's battled leukemia for years. The adorable, heart-melting Batkid Make-a-Wish day had San Francisco locals gathering all over the city to support Batkid, and several celebrities took to social media to root for the little one, too. Take a look at all the famous faces who couldn't get enough of the sweet Batkid story, from actors who have played Batman to President Barack Obama.


Even Batman couldn't have done better than Batkid.

During an interview, Christian Bale was over the moon about the whole thing:
"Wasn't that fantastic? I looked on the news and I saw this headline and thought, 'What's that?' And I saw all the pictures of him running around and saving people. It's so touching. He must have been bewildered! Hopefully, later on, he'll be able to look back and say, 'Oh my God, how amazing.'"


We're pretty sure Anna Kendrick speaks for all of us.

Just read about #BatKid and I am IMMEDIATELY in tears. Go #BatKid!

Batkid needed all the help he could get. Thanks, Val!

Just heard the riddler is robbing a bank in the financial district. Hurry #sfbatkid

See the rest of the cute celebrity reactions after the jump.

Oh, Elizabeth, it's never too late to gush about Batkid.

Bit late to #BatKid, but damn if he isn't a ROCK STAR! Also, a great reminder of the amazing work done by @MakeAWish. pic.twitter.com/7TP8ze1b6s

We can't tell if Stephen Amell is a little bummed out or totally relieved.

No crime left to fight. Thanks #BatKidhttps://t.co/P708He9hUC

There has yet to be a cure for Batkid-related sobbing, but rest assured, we'd like it, too.

Advice on how to stop crying over bat kid?

As a new dad, i am so moved by #batkid and by all the volunteers who are helping to bring his wish to life!! Awesome! #SFBatKid

With Olivia Munn by your side, you can't lose.

I love #Batkid. I'm cheering you on little man!! http://t.co/zqv7rMgbLG

2020 Election
Twitter Added New Retweet Rules Ahead of the Election, Including a Quote Tweet Function
by Chanel Vargas 3 hours ago

Celebrity Twitter
The Avengers Assembled Over Twitter's Chris Discourse — Where Was This Energy For Other Costars?
by Mekishana Pierre 9 hours ago