In Contagion, we watch as a deadly new disease wreaks havoc on the world — a premise that's terrifying for obvious reasons. Hopefully that fear doesn't keep people from seeing it, because director Steven Soderbergh delivers an entertaining, fast-paced film that mines disaster for thrills. Matt Damon tops a vast ensemble cast of other acting heavyweights, such as Kate Winslet, Marion Cotillard, Jude Law, Gwyneth Paltrow and Laurence Fishburne. Each character has a thread pertinent to the crisis, starting with Damon's Midwestern everyman whose wife (Paltrow) is one of the first patients to fall victim to the disease. The rest make up a slate of doctors, scientists, and bystanders who are all trying to make sense of the devastating infection. 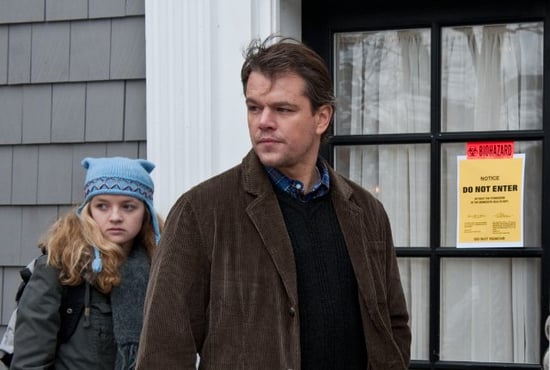 The tension of the film is amplified by the mystery of how quickly the infection is spread, and what its origins are. Contagion inspires double-pronged fear: what's worse, the fatal virus threatening to wipe out the population, or the hysteria and paranoia that inspires the living to turn against each other? Soderbergh provides a strong case for both as he explores a fictional outbreak that, alarmingly, feels like it could happen.

While the variety of story lines keeps you from getting anywhere near bored, it also works against the film. Some character arcs are weaker and less fleshed out, like Law's. As an opportunistic blogger, it seems like he's supposed to embody the downside of mass information in an epidemic, but instead his whole plotline feels shoehorned in as an attempt to modernise a crisis. Furthermore, the promise of a film packed with big-name actors doesn't exactly satisfy. Only some of Contagion's superstars get to interact with each other, and even then, their scenes are brief.

Despite the non-linear nature of each character's story, the performances are strong. Damon has more screen time than most, and it's well utilised. His character spends most of the film trying to keep his daughter safe from the disease that claimed his wife, and is thus denied the time to grieve because of the unusual circumstances. However, the film doesn't completely neglect the emotional aspect of the situation, and allows the actor a powerful moment of poignancy.

Fishburne, Jennifer Ehle and Cotillard also represent different human interest aspects. As doctors, they have access to inside information that presents them with moral dilemmas, such as warning loved ones if you could. Their situations add depth, as the audience is challenged to contemplate how we would react in the same positions.

Contagion may leave you with a bit of paranoia, but the frighteningly relevant scenario is too engaging to pass up. Just pass the hand sanitiser and enjoy.