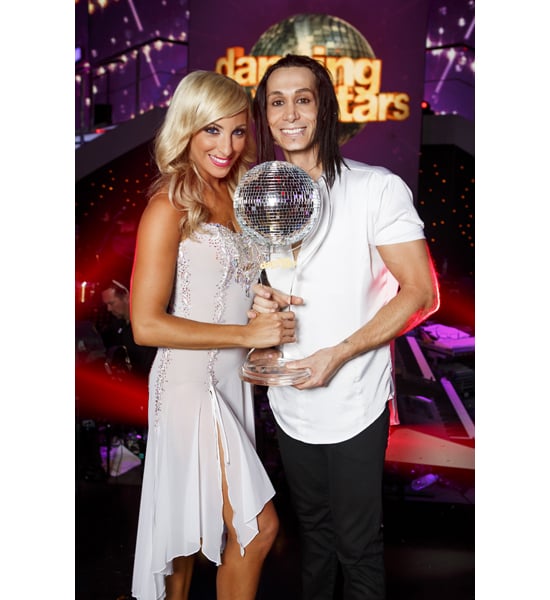 Cosentino and his professional dance partner Jessica Raffa were announced as the winners of Dancing With the Stars in Melbourne last night. The illusionist, who rose to fame on one of Channel Seven’s former reality shows, Australia’s Got Talent, took the title over Home and Away actress Rhiannon Fish and singer Tina Arena, whose elimination and second runner-up placement shocked the judges.

The three grand finalists took to the dance floor three times — even though Tina was eliminated after performing her tango and the cha-cha face-off, the judges were so keen to see her freestyle performance that she and partner Damian Whitewood were still able to perform their moving contemporary routine to a slowed-down rendition of “I’m Gonna Be (500 Miles).” Rhiannon and her partner Aric Yegudkin showcased their moves in a Viennese Waltz, cha-cha and Broadway routine to “You Can’t Stop the Beat” from Hairspray, while Cosentino and Jessica performed a samba, the cha-cha and a Romeo and Juliet-inspired freestyle to “Kissing You.”

Cosentino started off the series with top marks in the show’s first contemporary routine but his time on Dancing With the Stars wasn’t smooth-sailing. In the second week, Jessica sustained an injury after rehearsals and Cosentino had to partner with her friend Sriani Argaet for a few weeks. As for the other grand finalists, Rhiannon cemented her position as a contender when she received a perfect score on the show’s third week, and Tina was constantly praised by the judges and often found herself at the top of the leader board.

Congratulations to Cosentino and Jessica!