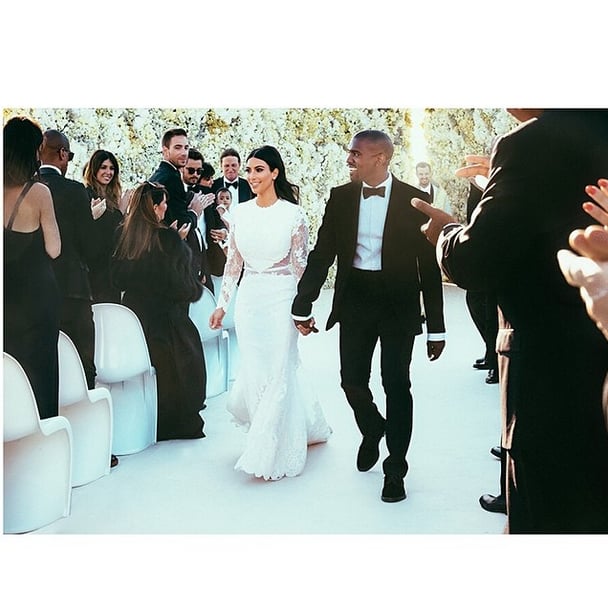 In case you missed it, Kim Kardashian and Kanye West got married in 2014 with an extravagant fete that spanned two cities and two days. The party started in Paris, where Kim and Kanye invited fashion's biggest names to kick off their wedding weekend at Valentino's Paris mansion, Chateau de Wideville. The day was topped off with a lavish private reception at Versailles. Next, the whole gang moved to Florence, where the couple were set to say their vows at Forte di Belvedere, a 16th-century Italian fortress. With so much going on, we decided the easiest way to digest the nuptials of the #WorldsMostTalkedAboutCouple was by breaking it down into simple figures.

The distance, in miles, that the wedding weekend spanned. The two started the party in Paris and then flew all of their guests to Florence for the official ceremony.

The number of Kim's brothers present at the wedding. Rob Kardashian and Kim's stepbrother, Brody Jenner, both skipped the bash. However, her other stepbrother, Brandon Jenner, did attend the event.

The number of Beyoncés at the wedding, as Queen Bey and Jay Z both opted out of the event to spend a quiet weekend in the Hamptons. Anna Wintour also reportedly declined Kim and Kanye's invitation to the event.

The number of times Kris Jenner used #HereComesTheBride on Instagram.

The total number of dress changes that Kim reportedly made. She had two outfits for her Paris bash and two dresses for the festivities in Italy.

On a scale of 1 to 10, the amount of cleavage Kris Jenner showed at the wedding.

The reported length, in minutes, of Kanye's speech during the wedding reception. During his speech, Kanye called Kim "the ideal celebrity . . . the ideal art" and said that the guests at his wedding were "the most remarkable people of our time."

The number of people present who starred in reality shows about their lives. This includes the Kardashian family; Jonathan Cheban, who starred in the Kim-produced The Spin Crowd; Brittny Gastineau, who was in The Gastineau Girls; and Brandon Jenner, who appeared on The Princes of Malibu.

The estimated cost of Kim and Kanye's wedding ceremony and reception in Italy. (No, that doesn't include Paris!)

The reported cost of one family dinner at Paris' Costes restaurant during the Kardashians' pre-wedding celebrations.

The year Forte di Belvedere was opened in Florence.

The estimated cost of renting Forte di Belvedere for a wedding.

The number of custom "Just Married" leather jackets that Kanye and Kim wore during their wedding reception.

The approximate number of teens who gathered outside Kim's wedding venue chanting Justin Bieber's name and hoping to catch a glimpse of the young pop star. Justin was not at the event.

The reported number of guests at Kim and Kanye's wedding.

The number of E! cameras recording the actual wedding ceremony. Kim said earlier this month that the wedding itself would not be featured on Keeping Up With the Kardashians but that they will show "everything leading up to and after" and share photos from the ceremony. By the looks of it, Kim and Kanye also banned guests from using mobiles during the ceremony.

The number of performances from big-time artists. Lana Del Rey performed at the couple's pre-wedding fete in Paris, while John Legend and Andrea Bocelli serenaded the couple in Florence. Kanye also reportedly performed a rap during the reception.

The base cost of getting Andrea Bocelli to sing at your wedding. His cost of services can sometimes exceed US$1.3 million.

The reported amount that Kanye paid Lana Del Rey to play at the couple's pre-wedding party.

Wedding
Lily Allen Is the Quintessential '60s Bride, With an Engagement Ring and Wedding Band to Match
by Kara Kia 11/9
Latest Celebrity
×