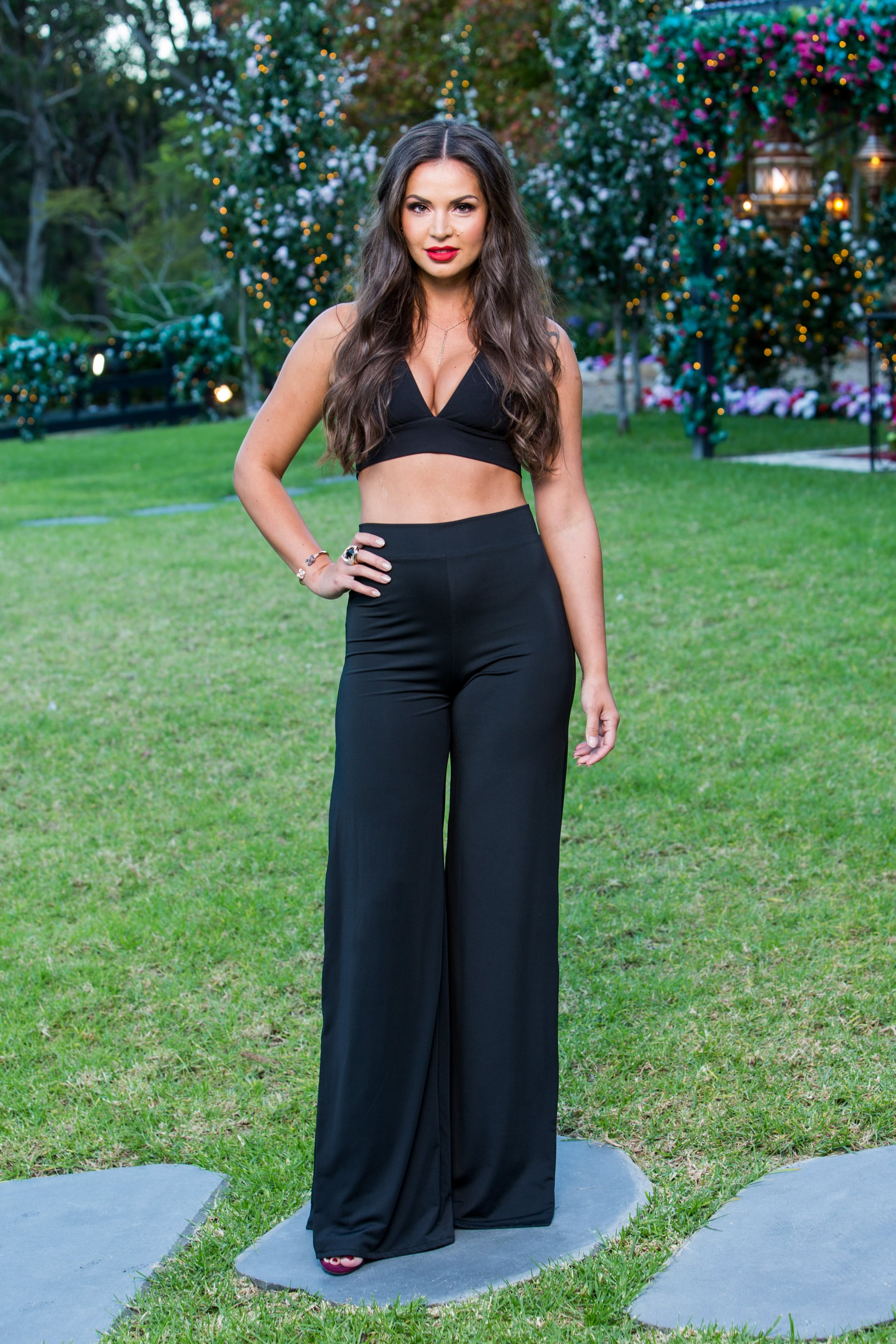 The Russian born beauty entered the house with a bang, wrapping her legs around the neck of The Bachelor and showing us all her impressive core strength. But while she remained both confident and oozing with energy, Wednesday night's episode of The Bachelor showed her struggle and vulnerability having been away from her son Leon for some time. Proving all too much for the 31-year-old fitness guru, Nick said goodbye to her, sending her home to see her son.

Related:
The Bachelor's Dasha and Emily Strike Out in Last Night's Episode

POPSUGAR Australia: In the lead up to the rose ceremony it was obvious you were missing home, especially your son Leon. How did you feel after not receiving a rose?

Dasha Gaivoronski: I can remember exactly how I felt in the moment. I felt surprisingly confident because I guess it had something to do with the fact that I was totally ready to go home, and I always trust my gut feeling . . . Which is why when I wasn't handed a rose I actually felt quite relieved like this weight lifted off my shoulders and especially now looking back I realise I probably wouldn't have been able to do it much more.

PS: Were you relieved because you wanted to see your son or because you didn't have feelings for Nick and thought you were wasting your time?

DG: Walking into the experience I knew exactly how it would be because we have done it before. My son was away for three months so we didn't see each other for that long once when he was four-years-old. I knew exactly how it'd feel, but also, this time I knew I was doing it for both of us and ultimately, I wanted to meet someone special and walks away from this experience with that person. So, for me, it was worth being away for that short period of time because, in the long run, it was going to better. But halfway through I started to realise that Nick was not the person I was going to end up with because he seemed to not be looking for the same thing I was looking for. We were just in completely different stages of life and Nick wasn't ready to settle down in the conventional, traditional way. Like he wasn't really ready for a family or a long-term partner kind of thing. So, for me, I'd just much rather stay single and enjoy my life as it is, but I was hoping that it was going to work out and that I had the wrong idea.

PS: What did Nick say or do to make you think he wasn't ready to settle down?

DG: First of all, because we were so close with all the girls in the house, whoever went on a date with Nick would come back home and tell us about their date and all of them seemed to have one thing in common and that was that he was saying "I'm not sure I'm ready to settle down, but maybe in the next five years". So, the more I heard that I thought well, maybe I got the wrong idea from him on my date because I was so sure that he was genuinely here to find someone to just be life partners with, but he seemed not to be after that at all. But at the same time, because of our beautiful date, I was still hanging off those memories and I didn't really want to get the idea from anyone else, but I actually never had that conversation with him, I never had the chance to openly talk to him about if he is after family or not.

PS: Your single date with Nick went really well but your extended date didn't. What happened?

DG: My first date was actually even better than that. You only get to see a little snippet of it, but it was a whole day together and it was so beautiful. The conversation was flowing, and I was really surprised by Nick because I'd never heard of him before in my life. I didn't even know he was famous, I just genuinely got to meet this guy and we just hit it off. We seemed to have a great connection and great chemistry and I was excited to see what would happen next. I think just because there was such a huge gap between my date and my extended time we kind of lost that vibe and I think Nick was a little too tired from the process. I just don't really think he thought the way he should have, he didn't think it was such a big commitment. He is there to meet 28 women in total and he ultimately wants to end up with one. Of course, he is going to hurt a couple of people along the way, but you've got to give it 100 percent and he was only thinking about the way he feels, and I think he was quite over it. Secondly, when I saw the date on TV I was quite surprised because it was actually quite a lengthy conversation we had, but I was mostly talking, and I think I was making the effort. I even told him a secret about myself not many people know about me, but he seemed to be really . . . he just came across a little bit superficial and disinterested, so of course, that hurt a bit. I lost myself during the process and looking back now I think I was a little bit silly and I should have just walked away straight away.

PS: What was the secret you revealed to him?

DG: When people ask me if I want more kids or not, sometimes I just brush it off and say, "I don't know". But the reason I'm not so sure is because before Leon was born when I was with my ex-husband, I was pregnant. I was 24, and when I was six months pregnant I lost my child. It was probably one of the toughest and most difficult times of my life and took many years to fully recover after that. But I'm lucky I have Leon now so I can talk about it now, whereas back then I couldn't even talk about it. I told Nick that. I think we were talking about me being a little bit cold-hearted and me walking into the experience being a little bit scared not knowing whether I'd be able to develop feeling for a guy. I actually haven't even felt anything towards anyone in about 10 years. Usually, people say I'm hard because I'm Russian but I know they are the reasons why because when that happened with the first child I kind of built up that barrier and I just didn't want to get hurt again. So that's why I decided to tell him because he asked me that question.

PS: Do you think being so upfront with him changed the way he felt about you?

DG: It wasn't that. I think if you like someone and want to be with someone you cherish and appreciate whatever information they share, especially when it comes to some sort of intimate details like that. But when you're not interested in the person . . . Yeah well, even when I told him that, his face just kind of stayed the same. He just kept this one face the whole time and kept chewing on his cracker . . . But I firmly believe you just need to be yourself and if someone doesn't like the way you are you just don't need that person in your life. It's as simple as that.

PS: Are you still looking for love?

DG: I walked away feeling a little bit more cynical than walking in and I'm definitely not looking for love. I still believe that true love exists but I've just changed my opinion about that. I'm not walking around looking for someone and I'm not answering any DMs and I'm not talking to anyone. Pretty much I'm just so focused on myself right now. There is a lot going on with my fitness stuff now and I just had to take some time to fully recover [from the experience] both mentally and physically. I had gained a lot of weight in the mansion, which totally shocked me when I jumped on the scales, so I just had to totally focus on my physical and mental health and Leon, too. I'm pretty happy where I am now, I'm just back to being a normal human, to be honest.