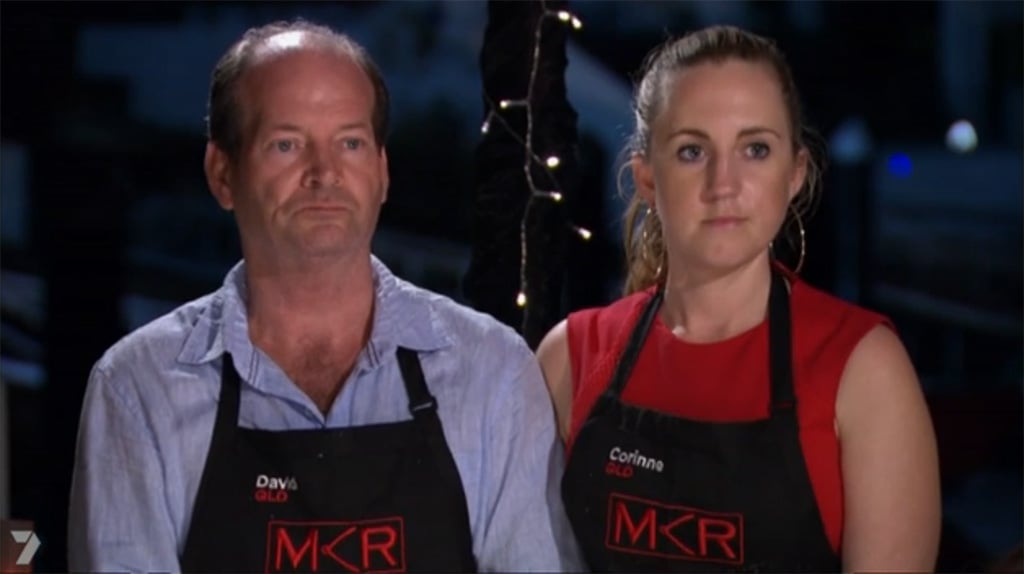 Ah, David and Corinne. The Captain from Cairns and his trophy wife had high hopes for their second instant restaurant on My Kitchen Rules, which aired on Channel Seven last night, but unfortunately what they learned from the first one didn’t translate into a successful evening for the couple. They wanted the highest score in My Kitchen Rules history; they ended up with the lowest. Here’s how it unfolded, and how their second restaurant compared to the first.

David made a comment at Harry and Christo’s second chance instant restaurant about how they hadn’t changed the décor very much from the first time. For The Quarterdeck, David and Corinne stuck with the same nautical theme on the deck of their waterfront house, including table settings and sailors hats for the guests, but unlike the first time they remembered to give their guests seats!

David and Corinne were much more organised the second time, after the judges slammed them for poor timing in their first instant restaurant (David got a beating for focusing more on homemade bread that only served as an extra in their main, instead of giving more attention to their angel hair pasta). But David didn’t seem too stressed, and still had time for a glass of red while Corinne ironed his pants just before the guests arrived.

There were high expectations for David and Corinne’s first attempt at an instant restaurant after David’s criticism of other people’s dishes in previous rounds. As a result, the other contestants didn’t hold back when it came to offering their own critiques on David and Corinne’s food. Among the criticism: the crayfish stack was hardly a stack with only two layers; the angel hair pasta was gluggy and the mud crab got lost within it; and how could they make a tropical Eton mess without any fruit?

Things didn’t get much better the second time. Pete Evans said their corn soup was the thickest he had ever come across, and Manu Feildel compared it to baby food. Their pork medallions didn’t look appealing on the plate and their mushroom sauce was panned. Corinne’s chocolate cake looked promising, with the contestants saying it looked beautiful on the plate. Unfortunately its “neither here nor there” texture (Pete’s description) meant it was an unpleasant piece of cake to eat.

David and Corinne scored 46 out of 110 for their first instant restaurant. For their second one, they only scored 27 — the lowest instant restaurant score in My Kitchen Rules history. (Gatecrashers Carly and Tresne were very generous by giving them a 7, which almost made up half the combined group score of 15.)

David and Corinne are now sitting at the bottom of the leader board, with only mother-daughter team Cathy and Anna left to cook in this round. Pete commended them on their organisation, saying, “I know you put a lot of effort into tonight — on time, clean, organised. But the thing that let you down tonight was your cooking.” By the end of tonight’s episode, one team will be eliminated from the competition.

Celebrity Interviews
There's a New Queen of Bayside, and Her Name Is Josie Totah
by Grayson Gilcrease 8 hours ago

TV
Will Ted Lasso Score a Second Season? Here's What We Know
by Ashley Broadwater 8 hours ago

Celebrity Interviews
According to Issa Rae, Insecure Season 5 Will Be All About "Grounding and Rooting Oneself"
by Monica Sisavat 8 hours ago