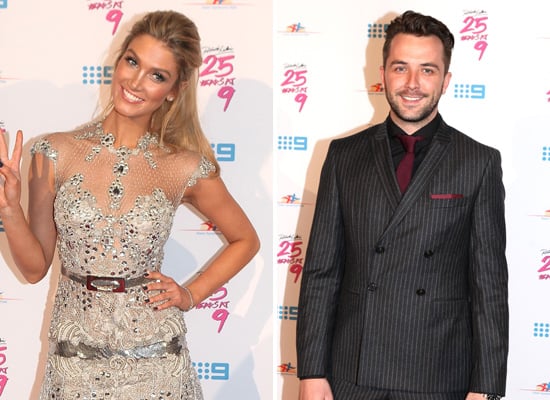 Delta Goodrem and Darren McMullen are dating, according to a new Daily Telegraph report. The stars of The Voice — she was a coach, he the host — were apparently open about their relationship at Lady Gaga’s Sydney concert on Wednesday night, where people saw them “exchanging kisses and holding hands for all to see.” They were there with a group of friends that included Delta’s fellow coach Keith Urban, who treated his wife Nicole Kidman to the concert for her 45th birthday.

There were whispers of a possible love connection between Delta and Darren during the show’s run when he came to her defence on TV, most notably on Mornings when he slammed one of Delta’s former team members, Peta Jeffress, who claimed she received hardly any one-on-one time with the “Born to Try” singer. Delta was last romantically linked to Nick Jonas, while Darren’s engagement to Rechelle Lee ended last year.

Celebrity Style
Lily Collins's Romantic Engagement Ring Is So Big, I Can Almost See My Reflection
by Chanel Vargas 17 hours ago

Celebrity Instagrams
Sophie Turner Just Shared Some Throwback Pregnancy Snaps, and, My God, They're Beautiful
by Brea Cubit 18 hours ago

Celebrity Engagements
Lily Collins Is Engaged to Charlie McDowell: "I've Been Waiting My Lifetime For You"
by Monica Sisavat 1 day ago

Chris Wood
Melissa Benoist and Chris Wood Welcome Their First Child: "This Little Boy Is Everything"
by Kelsie Gibson 1 day ago

Issa Rae
Issa Rae Keeps Her Private Life to Herself, but Here's What We Know About Her Fiancé
by Hedy Phillips 3 days ago

Celebrity News
Gigi Hadid Is a Mum! The Model Gives Birth to First Child With Zayn Malik
by Monica Sisavat 4 days ago

Emily in Paris
14 Photos of Lily Collins and Charlie McDowell That Will Have You Saying, "Ooh La La"
by Monica Sisavat 4 days ago
Latest Celebrity
×