This week's episode of Desperate Housewives follows the residents of Wisteria Lane as they deal with the aftermath of Julie's attack. At the epicenter, Susan's friendships with the housewives are tested (though most of the betrayals happen behind her back). Meanwhile, the newest neighbours find their son on the list of primary suspects and Mrs. McCluskey lands a new love. 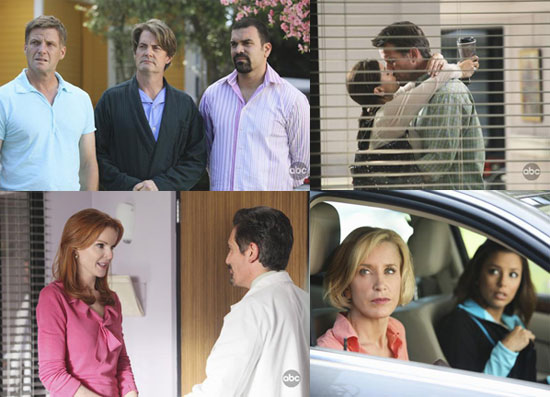 There were scandals all over the place this week, so let's get the party started.

. Susan—Susan's post-wedding morning bliss with Mike is quickly interrupted by Mrs. McCluskey's screams. As she faces the possibility of losing her daughter, Susan turns to her friends for comfort. In typical fashion, all the ladies have got their secrets—Lynette admits that Julie confided in her, Bree is sleeping with Carl and Katherine's throwing herself at Mike.

Lynette—Still in denial about her pregnancy, Julie's accident turns out to play a vital role in Lynette's decision-making process. I was surprised that she's seriously considering having an abortion, but relieved that Susan used her own situation to talk her out of it. Most of all, I'm glad that Lynette is facing the truth from here on in, since pretending her pregnancy isn't real was starting to get depressing.

Gaby—I'm loving Gaby's new life with a teenager. Her guidance on playing hard to get cracked me up, particularly when poor Carlos realizes how many dates Gaby broke off for no real reason. Bonding time between Gaby and Ana never lasts long though and by the end of the episode Gaby is grounding Ana for lying to the police about Danny's alibi. Though Ana continues to push Gaby's limits, so far her actions haven't strayed far from the typical high school realm—but I'm willing to bet it won't be long before things get out of hand.

Angie—Like any good wife and mother, Angie struggles to protect her family from both the police and the scrutinizing eyes of their neighbours on Wisteria Lane. She spends most of the episode trying to prove that Danny is innocent in Julie's attack, but I'm more worried about her husband than her son.

Katherine—Katherine finds a new confidant in Orson this week, trying to convince him that she's going to get Mike back. Orson has done some questionable things in the past, but even he doesn't fall for Katherine's deluded re-telling of what happened while Susan was at the hospital. Now that Bree's moved on, how long before Orson and Katherine end up in the sack?

Bree—Bree's discovering that Carl can bring out a whole side of her she never knew she had—a bad girl side. Not only do Carl's sleazy ways turn her on, but she realizes a bit too late that she's become a bad friend to Susan. Now the real question is whether or not Julie will remember catching Bree and Carl in the act when she wakes up from her coma. What did you think of this week's episode? Who do you think is behind the attack on Julie? (My money's still on Mr. Bolen). Are you excited to see Jesse Metcalfe return?