It's tough when two of your favourite actors get together for a promising-looking film that falls flat—you want so badly to love their work, but sometimes you can't help feeling unsatisfied. Such is the case with Dinner For Schmucks, which reunites two of my favourite funny men, Steve Carell and Paul Rudd. 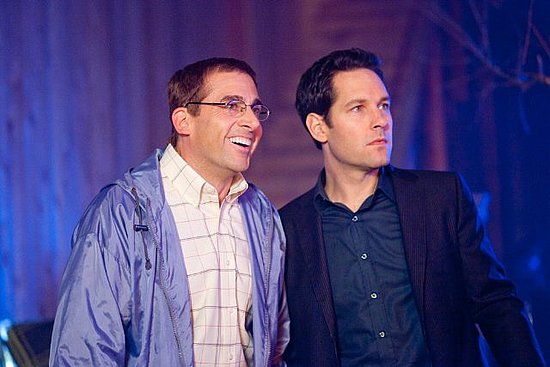 They play an odd couple thrown together when Rudd's character Tim accidentally meets Barry (Carell), a man who fills a strange and specific need: Tim has to bring an idiot to a gathering thrown by his boss in order to get into his good graces. If Tim brings the biggest idiot, he'll also get in line for a promotion at work. The potential for humour is there—but like a too-long dinner party, it starts out hot but gets cold and stale by the end. To hear about the highs and lows of Dinner For Schmucks, just read more.

The movie banks on the awkward scenes to provide most of the humour, but there are so many of these groan-worthy sequences that you stop squirming and just start getting bored. You know that the worst thing that can happen, will happen, so you're constantly waiting for the other shoe to drop. This is supposed to be building up for the climax of the movie—the fateful dinner for schmucks—but really, all these scenes that establish Barry's buffoonery just slow down the pace.

The film tries to put you on the same footing as Tim to make his situation more sympathetic. He's stuck between a rock and a hard place: it's either humiliate Barry or lose the promotion he's striving for. The movie constantly tries to insist that he's not a cruel or opportunistic yuppie, and that he just wants to be good enough for the girl of his dreams. Sadly, we're thrown into his world so fast that Tim never gets to look like much more than a jerk.

Similarly, you'd expect Barry to be a more sympathetic character too—after all, his only indication of idiocy at first is a strange talent for mouse taxidermy. But as Barry further intrudes into Tim's life, he turns needlessly destructive. Eventually there's a reasoning presented for his loneliness, but not his general craziness. When Tim starts to feel bad for Barry, you almost don't understand why.

It's a shame; there is a wealth of funny dialogue and supporting characters (Kristen Schaal and Jemaine Clement ruthlessly steal each scene they're in), but it's not enough to justify spending time with everyone else.