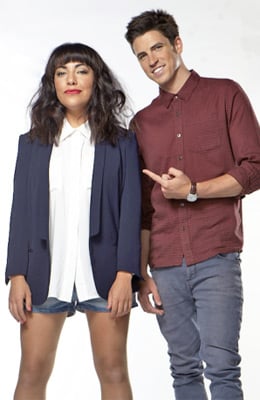 Back in December we chatted to Scott Tweedie, host of Eleven’s new Saturday morning music program The Loop, about what he was looking for in a potential co-host. He said Eleven, who held a nationwide search, wanted “someone with a personality that’s gonna be fun, good at interviews, and who can just show who they really are on screen without trying.” And it seems like they’ve found that person: Ash London from Melbourne beat more than 1,000 entrants to get the gig as Scott’s “partner-in-crime,” thanks to her extensive music knowledge and onscreen chemistry with Scott.

The Loop will start airing from this Saturday at 9 a.m. and will feature a top 20 countdown of the week’s most downloaded songs, as well as a social media aspect that highlights Twitter trends and viral videos.