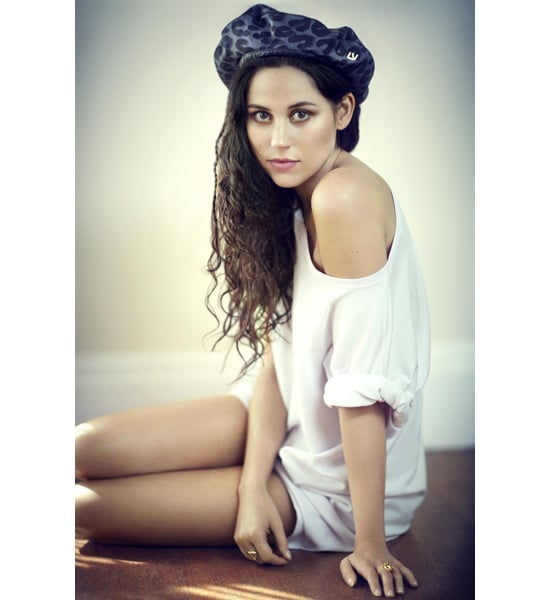 UK musician Eliza Doolittle has grown up a lot since the release of her first self-titled album in 2010, which is evident in her second studio album, In Your Hands, out tomorrow. The 25-year-old, whose real name is Eliza Sophie Caird, has a strong musical background and grew up playing several roles in different stage productions, but now she’s focused on sharing her own stories and experiences through her songs. In Your Hands is a more revealing record than her first, in terms of her life and her voice, with a sweet and sunny pop flavour, which can be distinctly heard in her first single “Big When I Was Little.” We spoke to Eliza to discuss the album’s production, what she learnt about herself while on tour, and what music she’s currently got on high rotation. You can also listen to a full stream of her album at the end!

How long did it take you to find the sound of this new album, and did you make a conscious decision to make it sound different from your first album?
It wasn’t conscious but with the time passing it was inevitable, because I had three years from the first album, and even most of the first album was written a few years before it came out. I think it’s one of those things where I’ve moved on with my age and changed. I’m showing a lot more of myself and a lot more of my voice by singing a lot more.

Were you on tour for a lot of the time in those three years between the two albums?
Yeah, for about a year-and-a-half I was on tour, and then I got straight into album. Then I spent about 18 months writing the album.

What are some of the biggest things you learnt about yourself while on tour?
Probably that I’m OK with my own company [laughs]! You’re alone so much.

More from Eliza, plus a full stream of her new album, when you keep reading.

Is there anything you missed out doing that your friends got to do that you wish you could have experienced?
I didn’t do things like go to university or go travelling, but in a way I’m glad I didn’t have to go to university, because when I was little I knew that you could leave school at 16. I really preferred music and singing. One thing I feel I’d like to do is the travelling — obviously I’ve travelled a lot, but the thing where you pick yourself up and put yourself in another country, and actually live there for a while. I think that would be really cool to do sometime. I did a bit when I wrote this album, when I lived in Los Angeles for a while, which was amazing, actually. I wrote half the record there and half the record in London.

How did you find being in LA affected your songwriting and the production of this album compared to being in London?
I was quite on my own, so I put a lot of time into writing, like every day and every night almost. In a way, because I was alone I had to sit there with my feelings, and they were very much there [laughs], I just had them on the tip of my tongue. If I’d been in London it wouldn’t have been that way, I would have had way more distractions.

You wrote more than 100 songs for this album. How did you edit them down to just 13?
It was hard [laughs]. A lot of them you know instantly, like, ‘That’s not quite right,’ and you move on and keep writing. But then you have some that are really in your heart, and it’s hard to decide what goes on, and all the songs on this album have their place. I think time always tells really well. I’m the perfect example of someone who goes, ‘The last thing I did is the best thing I did.’ Time always reveals whether it’s true or not. The ones that are on the album, I knew they were good and then they still stuck with me three months later.

Do you have a favourite aspect with music between songwriting, recording or performing?
No, I think they’re all as good as each other. Songwriting is the most fulfilling thing, crafting a song like that. Obviously singing is a bit part of it, and making sure my vocal is amazing as it can be. And when you’re performing, you’re recreating the moment you had in the studio, and what you’re feeling, or that whole expression, for the audition. In the way it takes it to the next level when you do that. And with singing, sometimes I don’t even sing my own songs, I’ll just be singing my favourite song in the shower. That feeling of singing is amazing.

I heard that when you write a song you envision yourself performing it.
Sometimes, and sometimes I think about the video as well. When it’s a good song you can really feel that straight away — you can see the stage and the audience.

Why did you choose "Big When I Was Little" as the first single?
We put that first because it links in the first album well, to remind people who I was, and then to take them onto the next song, and then into the album.

Do you have a favourite song?
It’s hard to pick a favourite. I think there are definitely more poignant songs, even more to me personally, because of what I’m talking about, and then are more carefree songs. Some of the poignant ones probably include “In Your Hands,” which is the title track, “No Man Can,” “Team Player,” “Don’t Call It Love” . . . I’m probably going to start naming the whole album [laughs].

You get to go to cool, exciting events, so what are some of your favourite perks of being in the industry that aren’t so intrinsically linked to the music?
[Laughs] I think the clothes and stuff. They’re really fun. Borrowing clothes for events and for music videos — that’s definitely my favourite perk.

What did you get up to at London Fashion Week?
I went to three shows and there were some parties — it’s really fun. You can see the creativity buzzing in the air, and the thrill of the lights and camera action.

Have you started planning the promo for this album, like touring and where you’d like to travel to?
I think we have started planning, but I haven’t got the plan right in front of me. There are definitely plans to come to Australia.

What’s your favourite place you’ve travelled to so far?
I had a couple of nights in Argentina that I’ll never forget. I was going through a bit of a heartbroken time and we were in Argentina, which for some reason switched up everything for me. It made me think, ‘F*ck it, life in the now, it has to be fun.’ We went tango dancing. It’s just such a beautiful, electric country. It’s so full of, I don’t know what, but it was so much fun and I never looked back after that. It was a really good trip.

What’s the first thing you like to do in each new place you go to?
I do like being a bit of a tourist and seeing the stuff you just have to see. We’re always with the label representatives from each country, and I always tell them to take us to their favourite place, rather than the poshest place, or a generic restaurant. I like going to their favourite, really local restaurant or bar, or dance places. I feel like you get to see the city more if you do that in that way.

Have you had any crazy fan experiences?
I don’t know . . . Twitter can be quite fun sometimes [laughs]. You get some funny, naughty things said on Twitter. But I haven’t experienced anything too crazy, at least not yet.

How hands on are you with your social media?
Someone was posting comments on my YouTube account because obviously a few people must have the account information from my label, and if someone got it and was posting comments from it, I was so freaked out by that. I have to do it myself and make sure it’s all coming from me, because I don’t understand why anyone would chime in.

Obviously the label will say things like, “You need to say this on Wednesday,” or, “Make sure you tell everyone about your gig,” which I totally get — you need to have it organised. But it’s got to come from you.

Who or what are you listening to at the moment?
Drake’s new album; the Arctic Monkeys’ new album. I’m actually listening to an old album by an artist called Bilal which is produced by Dr. Dre — it’s really good. I’m listening to Sam Smith, a UK singer who if you haven’t heard yet is insanely amazing. Tom Odell. The Jay-Z record. Off the top of my head that’s it!

How do you fill your downtime?
I’m one of those box set DVDs kind of girls. That’s my time to switch off. I also play the piano, which I know is music, but I actually enjoy it. I also played video games. I just got the new GTA, which is fun. I like Grand Theft Auto quite a lot, even though I’m a very peaceful human [laughs]! I can tell the difference.

Celebrity Interviews
How True to Life Is the Trial of the Chicago 7 Script? For Yahya Abdul-Mateen II, Very
by Kelsey Garcia 5 days ago
Latest Celebrity
×