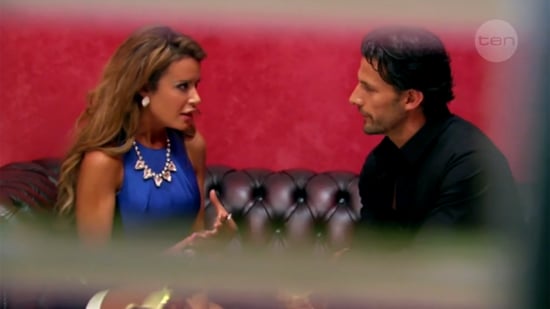 One girl decided that finding love on a TV show was not quite her thing. On last night’s episode of The Bachelor, just the second of the series, 25-year-old Emma, an events director from Queensland, shocked Tim and the rest of the girls when she voluntarily pulled out of the competition. While Tim was having a chat with Anna, Emma interrupted them, saying, “I just have to talk to Tim pretty urgently,” and in her piece-to-camera she said, “After being here it’s been such a great experience, but something’s not right.”

She got to the point quickly, telling Tim, “I just wanted to have a bit of a chat with you, and let you know that I’ve decided to leave the house. It’s nothing to do with you, you’re amazing. It’s just because I feel like there’s a lot of girls here who are really, really into this, and really here for the right reasons, and I just feel like I’m not fully here.” Earlier in the episode, Emma had been chosen by Tim to participate on the fashion shoot group date, where she was paired with Ali for a Victorian era-themed photo shoot. Emotions ran high as the cameras flashed, with the girls having to watch on as Tim got cosy with the other girls.

After being advised of Emma’s decision, Tim said, “I was a little bit thrown. I was a little bit disappointed I didn’t get to spend more time with her. It just would have been nice to get to know her a little bit better. But I respect that she just didn’t feel as comfortable as she should in the house.”

Emma wasn’t the only one to leave the show, though, as it concluded with another rose ceremony that saw Elizabeth and Amy left standing on the left side of the staircase, rose-less. As for the other main date of the episode, 22-year-old florist Sarah was separated from the pack for the first solo date, which included a helicopter ride to Byron Bay and a horse ride along the beach.

TV
Etsy Is Selling Schitt's Creek Face Masks, and You Bet One Says "You Just Fold It In"
by Emily Weaver 19 hours ago

TV
The Right Stuff: Read This If You Can't Wait to Find Out Who Makes It to Space First
by Ashley Ortiz 21 hours ago