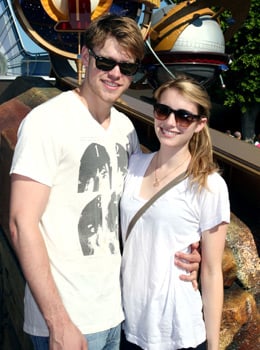 Chord Overstreet and Emma Roberts have reportedly split. According to Just Jared, the stars called it quits after nine months of dating, with a source saying, “They’re just on two different paths in life. They just grew apart and decided to part ways.” Chord and Emma didn’t hide their relationship — they were snapped together on rides at Disneyland last August — but walked red carpets solo. On Monday, Chord attended the SAG Awards and apparently seemed “fine” at the after parties with his Glee co-stars. Emma was recently in Park City for Sundance to promote her new film Celeste and Jesse Forever.

Issa Rae
Issa Rae Keeps Her Private Life to Herself, but Here's What We Know About Her Fiancé
by Hedy Phillips 7 hours ago

Celebrity News
Gigi Hadid Is a Mum! The Model Gives Birth to First Child With Zayn Malik
by Monica Sisavat 1 day ago