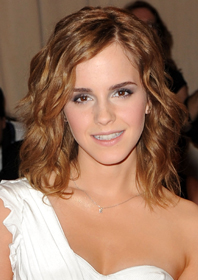 It's a far cry from Harry Potter, but I'll take it. Emma Watson, most often known as Miss Hermione Granger, has found her first post-Harry role: she's in negotiations to star in the film adaptation of The Perks of Being a Wallflower. The bestseller is a beloved coming-of-age story about a teen boy who writes letters about his adolescence and it seems that that part has been clinched too. Logan Lerman, who most recently appeared in Percy Jackson & The Olympians: The Lightning Thief, is also in talks to appear. If you read the book, let me know—is Watson a good fit?

Celebrity Interviews
How True to Life Is the Trial of the Chicago 7 Script? For Yahya Abdul-Mateen II, Very
by Kelsey Garcia 1 hour ago

Movies
Jennifer Hudson Is the Queen Incarnate in These Photos From the Aretha Franklin Biopic, Respect
by Mekishana Pierre 1 hour ago

Movies
11 Movies Like The Trial of the Chicago 7 That'll Have You Saying, "Order in the Court!"
by Grayson Gilcrease 4 days ago