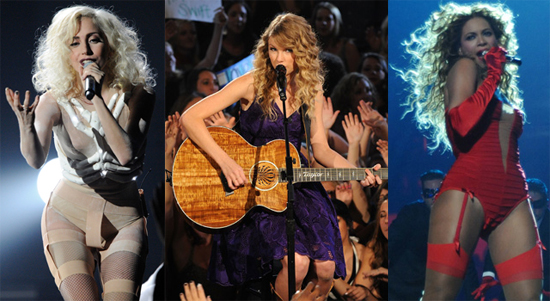 The Grammy Awards rolled out the red carpet with a one-hour live show to celebrate their 2010 nominees. (Check out photos from the event here.) The night also featured performances by previous winners like the Black Eyed Peas, along with the announcement of this year's nominees. And the results? This year is all about the ladies. Taylor Swift has already run away with the majority of awards in 2009, and she's towards the top here too, earning eight nominations including Record of the Year and Album of the Year. But somewhere out there, Kanye West is smiling, because his girl Beyonce bested Ms. Swift tonight with a total of ten nods. As for me, I'm especially happy to see Lady Gaga get recognition in multiple categories following a disappointing run for her at the American Music Awards. Also worth noting — the boys of The Lonely Island have been nominated for their music video "I'm on a Boat," featuring T-Pain. It's nice to see the nomination committee has a sense of humour. We'll find out who takes home the golden record player when the awards show airs on Jan. 31.

RECORD OF THE YEAR
"Halo," Beyonce
"I Gotta Feeling," Black Eyed Peas
"Use Somebody," Kings of Leon
"Poker Face," Lady Gaga
"You Belong With Me," Taylor Swift

SONG OF THE YEAR
"Poker Face," Lady Gaga
"Pretty Wings," Maxwell
"Single Ladies (Put a Ring on It)," Beyonce
"Use Somebody," Kings of Leon
"You Belong With Me," Taylor Swift

BEST MALE POP VOCAL PERFORMANCE
"This Time," John Legend
"Love You," Maxwell
"Make It Mine," Jason Mraz
"If You Don't Know Me By Now," Seal
"All About the Love Again," Stevie Wonder

BEST ROCK PERFORMANCE BY A DUO OR GROUP WITH VOCALS
"Can't Find My Way Home," Eric Clapton and Steve Winwood
"Live in Technicolor II," Coldplay
"21 Guns," Green Day
"Use Somebody," Kings of Leon
"I'll Go Crazy If I Don't Go Crazy Tonight," U2

BEST COUNTRY COLLABORATION WITH VOCALS
"Beautiful World," Dierks Bentley and Patty Griffin
"Down the Road," Kenny Chesney and Mac McAnally
"Start a Band," Brad Paisley and Keith Urban
"I Told You So," Carrie Underwood and Randy Travis
"Everything But Quits," Lee Ann Womack and George Strait