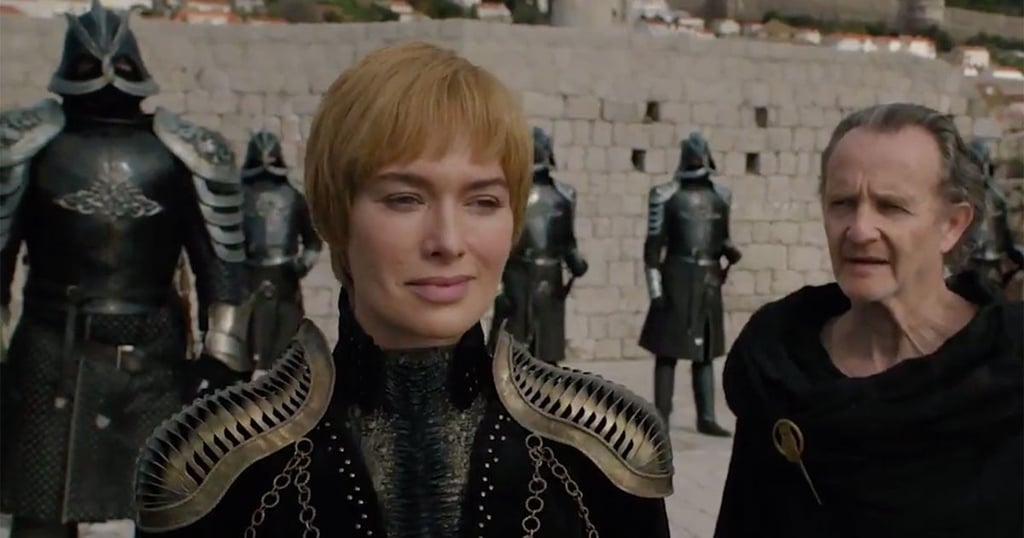 We know that, for fans, the premiere date for Game of Thrones's eighth and final season, April 14, feels like an eternity away. With all the clues being dropped by the cast about what we can expect in the last season, it's hard not to let that impatience get to you. Well fans, the official trailer for season eight is finally (FINALLY) here. And it's a doozy.

The trailer starts with a flash to Arya as a child, scared and hiding, before it transitions to the Arya we know now, running through Winterfell with a bruised face. The video flashes to different characters seemingly prepping for the battle of Winterfell as Arya's voice calmly states, "I know death. It's got many faces. I look forward to meeting this one." Actual chills.

The rest of the footage shows Cersei and her entourage in Kings Landing, Dany and Jon arriving in Winterfell, and the uneasy alliances between Dany's followers and those of the North preparing to go head to head with the Night King's army. Brief glimpses of the epic battle are shown and we see Jaime, Grey Worm, Brienne, and more as the living and the dead finally clash.

Once you finish making a few theories based off of the official trailer, you can check out the previously released teasers ahead! Though the clips have been short and cryptic, they do give fans more than enough to speculate on the who, what, where, and whys happening in the next season, and that will definitely get us through as we wait for more info. Check out the video above, and after your fourth rewatch (at least), read these theories on how the eighth installment might shape up.