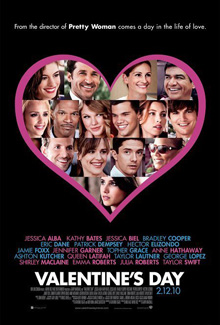 You ready for this? The star-packed Valentine's Day—which hasn't even hit cinemas yet—is reportedly getting a sequel. The new installment will be based around New Year's Eve, with an ensemble of characters celebrating the change of year in New York City. The plan is to have a few of the Valentine's actors return, along with their director Garry Marshall for consistency.

New Year's Eve is definitely ripe for a good relationship storyline (just think of the classic When Harry Met Sally ball drop scene), but where do the holiday rom-coms stop? The possibilities seem endless. So with that in mind, I'd like to pitch Hollywood the following holiday-themed romantic comedies.