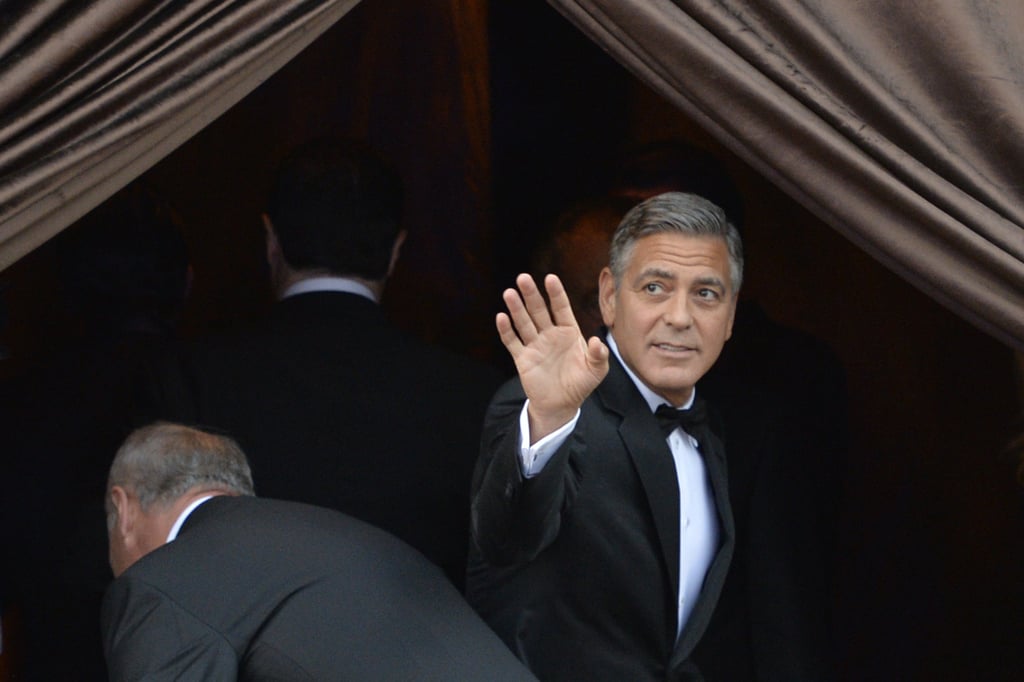 George Clooney is married! The actor's rep confirmed the news, writing in a statement that George and Amal Alamuddin were married in a private ceremony. George and various wedding guests were spotted arriving to his wedding at Hotel Aman via water taxi in Venice on Saturday. Earlier in the day, the groom was spotted enjoying an al fresco breakfast with Rande Gerber and Cindy Crawford. Guests to the pair's nuptials include Matt Damon and his wife, Luciana Damon, John Krasinski and Emily Blunt, and Anna Wintour, who took a break from Paris Fashion Week to attend George's big day. They were all spotted arriving in Venice on Friday, where they boarded private boats to take them to the bride and groom. Later, the gang was all seen attending a rehearsal dinner at a local eatery.

Although Amal and George were reportedly friends before they got romantic, they only started to spark romance rumours last October. The pair got engaged in April following a romantic safari journey in Africa and a controversial date at the White House, where George screened The Monuments Men for President Barack Obama. (Critics raised eyebrows at the fact that Obama was hanging out with lawyer Amal, who is currently working on WikiLeaks founder Julian Assange's extradition case.) It appears that the accomplished lawyer has fit in with George's impressive group of friends, as she was spotted attending Angelina Jolie's Global Summit to End Sexual Violence in Conflict in London back in June.

Wedding
Rebecca Vallance Is Launching Wedding Dresses, So Modern Brides, You Can Stop Searching Now
by Kate McGregor 16 hours ago