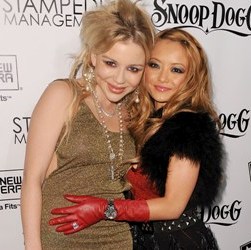 Casey Johnson, the heiress to the Johnson & Johnson fortune who recently made headlines with a reported engagement to reality star Tila Tequila, has died at age 30. Authorities arrived at her LA home at 11:51 a.m. Monday and she was pronounced dead at the scene. A police spokesperson said it appeared to be a natural death, but that the coroner would run a toxicology report. Tila immediately took to her Twitter page, and claimed at one point that Casey was “in a coma.” Casey’s antics and fights with ex-girlfriends have attracted a lot of attention in the last few years and Tila said the two had recently had a spat. After claiming that she was going to be offline and begging for her privacy, Tila then continued to post constant Tweets commenting throughout the day.

Red Carpet
The Cast of Mulan Looked So Regal at the World Premiere, We Have No Choice but to Bow Down
by Monica Sisavat 11/3/20