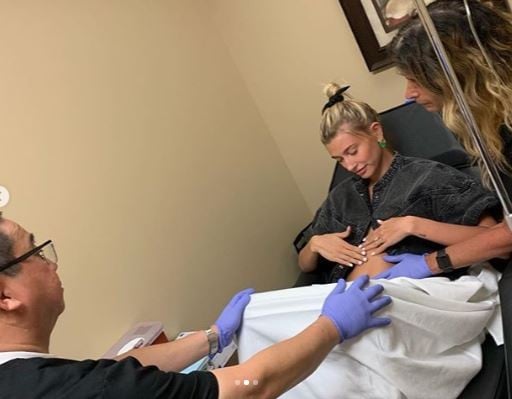 Justin Bieber announced he and wife Hailey are expecting a baby, but is it true? The 25-year-old singer posted a picture of a sonogram to Instagram on Tuesday morning without a caption. We took it with a grain of salt because it is after all, April Fool's Day in the US. And sure enough, Hailey commented almost immediately with, "Very funny...". But then, Justin 'grammed again . . .

This time, he shared a series of three photos picturing Hailey in a clinic cradling what appears to be a little baby bump, with two doctors by her side. The caption read, "If U thought it was April fools". Just as we started to let ourselves get excited, Justin got us again with a third post, this time with a sonogram of a puppy. So, what does this all mean? There are three possible answers.

1. Hailey Baldwin is pregnant with a human baby.

2. Hailey Baldwin is not pregnant.

3. Hailey Baldwin is pregnant with a puppyy.

If it's not option three, we really hope it's option one.

Workouts
Bored With Your Cardio? Press Play on This "Yummy" Dance Workout From Fitness Marshall
by Samantha Brodsky 3 days ago

Celebrity Babies
Yep, Kristen Bell and Dax Shepard Seem Like Pretty Cool Parents to Us; Here's the Proof
by Murphy Moroney 6 days ago

RIP
Dwayne Johnson Thanks Fans For “Outpouring of Love” While Mourning Late Father, Rocky
by Karenna Meredith 6 days ago

Chris Martin
Chris Martin Tried to Visit 15-Year-Old Apple at Her First Job, and It, Uh, Did Not Go Well
by Karenna Meredith 1 week ago
Latest Celebrity
×